M.A.X.: Mechanized Assault and Exploration is a hybrid turn based and real time strategy game developed and published by Interplay in 1996.

Set in a distant future where mankind has long abandoned Earth, an alien species offered to help humanity to seed new colonies throughout the universe, and in turn humans would fight in their wars as soldiers and strategists. The entirety of the human race now lives on a massive alien ship, and they have divided themselves into several factions, each with many colony ships of their own, and the aliens pit them against each other and let the victorious party colonize the planets they conquer. The brains of mankind's best strategists are removed and put in the alien's cybernetic machines, where they can lead the war and colonization effort. The player assumes the role of one of these cybernetic mission commanders.

The game is viewed from an overhead perspective, with multiple zoom options and features three game-play modes - turn based, simultaneous turn based and real time. The player needs to construct mining outposts, power stations and power lines, storage facilities and manufacturing plants as well as to build offensive and defensive units and manage supply lines. Unlike many other strategy games, ammunition and fuel is a limited resource and needs to be supplied to your front line units.

Each unit has several stats that can be upgraded over time (as well as gain ranks through experience), such as effective range, movement speed, ammo and fuel capacity, and managing these upgrades right may become a deciding factor during a battle - air units with upgraded speed and range may attack and retreat from enemy territory before the enemy's anti-aircraft guns have the opportunity to open fire. Apart from the different zoom levels, there are also several different game overlays that can be activated to display movement or attack ranges.

Aside from a lengthy campaign, the game had a very customizable skirmish mode and multiplayer for up to 4 players over LAN, modem or hot seat.

Command & Conquer, move over. M.A.X. does it better, albeit with players spending much more time learning the game. With numerous missions, a campaign mode, and multiplayer support, do not expect this game to get old anytime soon. M.A.X. raises the standard for strategy games to a new level.

M.A.X. mostly got positive reviews, Gamespot's Kevin Mical praised the graphics, game-play and near infinite replayability, and gave the game an 8.6 score. The game's steep learning curve was criticized though.

The DOS version suffered from some severe late game memory issues, around 100 turns into a match, save games could become corrupt and there was a high risk of the game crashing. Some of the bugs have been traced to an old version of DOS4GW that the game used, the 1994 version 1.97 instead of the then recent version 2.01. Fans have reported that upgrading DOS4GW to the more recent version makes it possible to play over 250 turns, but after that similar problems start to crop up.

Due to the technical issues with the game, which make it particularly hard to play long matches against other people online several fan projects have appeared, the most active ones being M.A.X. Reloaded and Russian M.A.X. Club. M.A.X. Reloaded is an open source re-implementation of the M.A.X. gameplay (either with new, free and open source graphics, or with the option to import the graphics from a legal copy of the game from CD-ROM or GOG), limited to online multiplayer only, and intended for real-time multiplayer, whereas RU M.A.X. Club uses fan patches for the original DOS version and is used to play by e-mail. 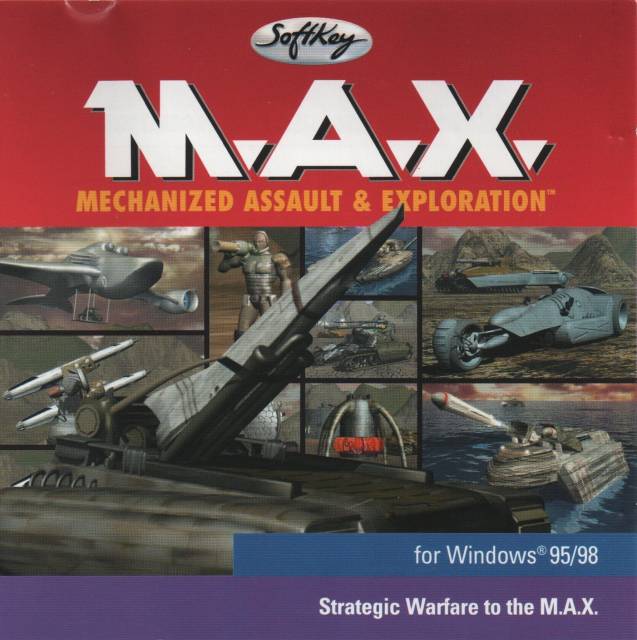