NBA Street V3 is the third entry in the popular NBA Street Series. Following in the footsteps of past games in the series, the game allows you to perform over the top dunks and tricks with your favorite NBA players.
PlayStation 2

NBA Street V3 is the third game in EA Sports Big's style focused basketball series. It is the first game in the series to feature online play in the Playstation 2 and Xbox versions. The game also includes a "trick stick" which allows players to perform crossovers with the right analog stick. Holding any of the turbo buttons while moving the trick stick allows for various moves. The more turbo buttons held down, the harder the trick the baller will try to perform. DJ Bobbito Garcia returns as the game's announcer.

Gamebreakers also received a major update from the previous games. When a gamebreaker is used inside the 3 point line, the player enters into a dunk mode almost identical to the system used in dunk contests. The player can use the trick stick to do mid-air tricks before finishing the gamebreaker or they can pass it to another baller who can continue the gamebreaker. Doing more tricks before finishing the gamebreaker translates into more points added to the player's score and subtracted from the opponents. If a player intiates a gamebreaker outside the 3 point line, the selected baller will shoot the ball for a minimum amount of points added and subtracted.

During dunk contests, players can place obstacles in front of the rim(such as tables or even refrigerators), or bounce the ball off the backboard while moving the analog stick in mid air to perform different dunks. A panel of three judges each give scores from 1 to 10 based on the difficulty of the dunk.

NBA Sreet V3 features many creation modes, including returning ones as well as new ones. The character creator and team creator return from previous games in the series. New to the series are the shoe creator and the court creator.

One special feature unique to the GameCube version of the game were the appearances of Mario, Luigi and Princess Peach from the Mario universe as playable characters. This is widely considered an attempt to make up for the GameCube's lack of online play.

All three versions of the game have the Beastie Boys (Mike D , Adrock , MCA) as an unlockable team. 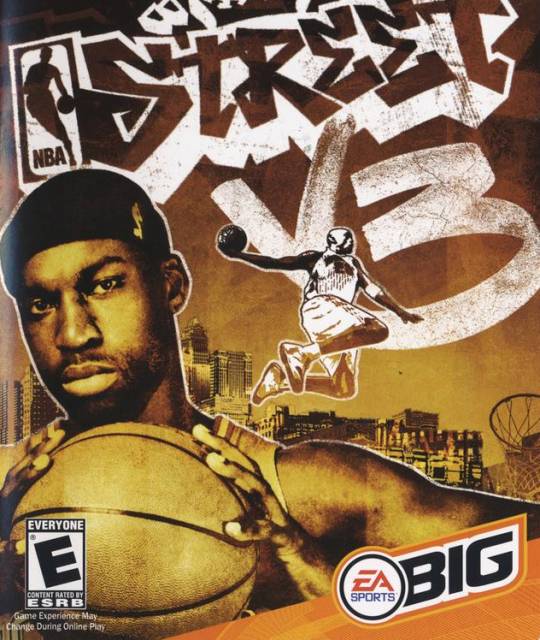