America's Army is a free online FPS that simulates realistic combat situations, and was developed by the United States Army.

America's Army is a modern combat simulator, developed by the US Army, that integrates real life training techniques, accurate physics, and a detailed look at the basics of modern combat. The game purposefully lacks healing mechanics and player assists, in order to encourage tactical play.

The game was developed both as a recruitment tool for the Army, and a training tool for soldiers. A special versions exists that is tweaked specifically for training purposes, and is accessible only to Army personnel.

Gameplay is tailored to be as close to a real life combat situation as possible. The player will always be American regardless of the side they are on. To the player the opposite team members are re-skinned to look like the opposing force.

Honor is a skill ranking system used in America's Army. Players gain and lose Honor points depending on their actions in the field; specifically, killing enemies and capturing objectives while following the Rules of Engagement will increase Honor, but breaking the RoE will decrease Honor. Each player starts at level 10, and this level increases or decreases as the player gains or loses Honor.

Server admins can set Honor level limits, restricting certain players from joining if their Honor levels are too low or too high, depending on the level of technicality and realism desired.

America's Army follows the actual military Rules of Engagement. Certain basic laws must be followed in warfare. These laws guard against needless killing; in game, if the player shoots another teammate or a civilian they will lose honor points.

The HUD in America's Army is pretty standard as far as First Person Shooters go. The HUD displays the amount of Ammo and magazines you have available, as well as the type and quantity of Grenades the player has.

Objectives are displayed at the top right corner of the screen which vary from map to map.

In earlier versions of the game there was no mini map. Simply a compass and squad commands were used to locate and pinpoint enemy activity. In later versions a Situational Awareness Indicator (SAI), which is a mini map added in order to reduce friendly fire situations as well as help coordinate an often uncoordinated team. There is no way to pinpoint an enemy's exact location on the map however.

There is no healing possible during a round. If the player gets shot but not killed, they will bleed until either they wait for the bleeding to naturally stop by staying still for some time, or by calling for a medic.

If a medic is able to tend to you, no health can be regained, although the medic can properly bandage your wound in order to stop the bleeding.

Green indicates that the player is in perfect health, Red is when the player is dangerously close to death. When a player gets injured, the ability to steady their own aim and to move is impeded.

A newer feature in America's Army is Instant Action. As opposed to the past setup, new users are able to play America's Army without completing Basic Training. However users who have not completed basic training may not level up past level 20.

On November 6th, 2003 the development team released version 2.0 of America's Army. This new version renamed the game from America's Army: Operations to America's Army: Special Forces. 2.0 still had the features of past versions, but also included Special Forces weapons, maps and missions. Paramilitary operations were introduced, including the use of non-American allies as playable characters. Players who do not complete the Special Forces training are restricted to using Indigenous Forces on these maps.

The introduction of the Special Forces to America's Army opened up the opportunity to use Indigenous forces in game play. A primary function of the Army Special Forces is force multiplying. Force Multiplying is used in real life situations where covert military operations are needed. Usually a small team of special forces will infiltrate the region in conflict and train the local populace on weapon usage and tactics.

In the game, the players who play as these soldiers don't wear military uniforms and use soviet made guns. This can be dangerous as the IF players on the map look similarly like the enemy and use the same weapons, making it hard for allied soldiers to discern friend from foe.

In order for the player to play the game properly, they must first complete Basic Training.

Training that is required by all users to play regular server matches. The training teaches basic rifle procedures including properly aiming, reloading and switching firing modes. Advanced Marksmanship training is unlocked if the player is successful in hitting the majority of the targets.

This mission puts you on a firing range letting you test out the guns you can deploy with.

Allows the player to familiarize themselves with the basic movements in game. The Eagle Tower is modeled after the real life obstacle course that soldiers must complete in basic training.

A test of your skill with the firearms and the ability to discern friend from foe, you must complete the kill house in as little time as possible hitting only the terrorist targets and avoiding civilian and friendly targets.

The following training courses are not required to play America's Army online; however, completing these training missions allows the player access to more weapons and maps.

The medic training course puts the player through a classroom environment course in learning how to properly tend to a wounded person. The course is shown in game on a projector using real images and properly showing the player how to treat an injured person in a real life situation. After completing the course the user simply holds the E key down to patch up a bleeding soldier.

Clearing this course will allow the user to operate sniper rifles in game.

Airborne training puts the player through training similarly seen in real life Airborne exercises. Once the player completes the training they will be able participate in Airborne Maps online.

Completing the Javelin Missile training allows the player to operate the Javelin system during game play. It is used on maps that involve computer controlled vehicles.

The player must successfully navigate a driving course to be qualified to drive a HMMWV in game.

Successfully complete the test range in order to operate a CROWS, in game. The CROWS was added in patch 2.8 along with the HMMWV keeping up to date with Army standards. With the CROWS, the soldier operates the system from relative protection inside the vehicle; the system uses an LCD screen and a control panel to operate the gun.

America's Army uses authentic fire arms that are used in Combat today. The weapons are modeled to the look and feel of their real life counter parts.

Americas Army Server Manager is a standalone application allowing players to set up and run their own servers. The servers will remain unranked however unless they pay a monthly fee allowing Americas Army Honor Points to be rewarded.

America's Army 2.8 introduced the Mission Depot. The Mission Depot is a website that allows users to upload their own maps for judging; maps that turn out to be favorable are added to the game. In order to create maps, the dev team released the Americas Army map editor, which runs on the Unreal Engine. This allows the user to re-purpose the in game assets for new maps.

The America's Army development team is currently working on a completely new version of the game. Taking advantage of the Unreal 3 Engine, the game will be built from the ground up. 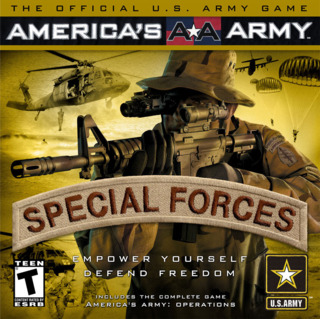