An action platformer game released in 1988 by Konami for the Famicom Disk System and was later made available via the Wii Shop's Virtual Console.

Bio Miracle Bokutte Upa is a Konami platformer for the Famicom that only saw a US localization when the game was released on the Wii Virtual Console. The game is notable for putting the player in the role of an infant, though one that is capable of handling himself.

Originally, the game came out on the Famicom Disk System peripheral for the Japanese Famicom. It was later re-released in cart form for the Famicom in 1993, late in the system's lifespan. The US and Japan Wii Virtual Console releases occurred in 2008.

In Bio Miracle Bokutte Upa the player takes on the role of Baby Upa the prince of the Akuyo Kingdom. Prince Upa takes on adventure over seven different worlds in order to save Akuyo Kingdom from a dangerous demon named Zai.

Upa defeats his enemies he meets along the way by inflating them with his baby rattle. After inflation Upa can use the enemies to his benefit by bouncing off of them or riding them around. Prince Upa must take care to avoid classic perils like thorns and pits. Power-up items in the game take the form of milk, to restore health, and bells, which give temporary invulnerability. 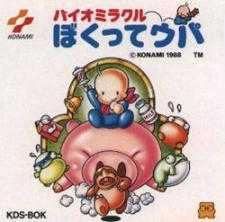