The Genesis and Saturn versions of Sonic 3D Blast are identical aside from a few key differences:

Flicky Island is a isle that is inhabited by birds called Flickies. These strange birds have magical properties, and one of those powers include traveling to different dimensions through large gold rings. Also on this island are the seven Chaos Emeralds that have incredible powers. Dr. Robotnik discovers this island and he realizes that these 7 gems are here. Then, he finds the Flickies and turns them into robot minions to help him search for the Emeralds.

Sonic, who is a friend of the Flikies, shows up at the island. He finds what his nemesis Robotnik has done to them, and now it's up to Sonic to destroy all of Robotink's badniks to free all of the Flickies. Sonic and the Flickies then help each other out to prevent Dr. Robotnik's plans. That is where the birds ability to transport to altered dimensions comes in. This useful power is the way to get to Robotnik and ultimately stop him from getting the Chaos Emeralds and gaining the power to rule the world.

Playing as Sonic, the player must destroy Robotnik's robots or badniks in order to release the trapped Flickies. Then the player has to collect those Flickies in order to advance to the next zone by going through a large gold ring. The player has to collect five Flickies to advance. The game has seven zones each with three acts. Act 1 and 2 are regular levels which the player explores around the level, destroys enemies, and collects Flickies. The third act is a boss battle.

Their is four types of enemies each level and each of those enemies releases a different colored Flicky. Blue Flickies try to find Sonic and when they can't find him they fly around in circle. Pink Flickies are the same as blue ones, but fly around in a larger circle. Red Flickies fly from point A to point B and they don't try to find Sonic, they also jump at times, and they are difficult to catch. Green Filckies make no attempt to find Sonic and move around randomly. Once Sonic reaches and touches him they follow him around. If Sonic is attacked by an badnik he loses a Flicky and he must get him back.

Controlling Sonic and other gameplay features are much like other Sonic games. For the Genesis, the D-pad moves sonic around the area, the A button and C button make Sonic jump, and the B button makes Sonic roll into a ball and do a spin dash. And, like many other Sonic games, collecting rings prevents Sonic from dying when he is attacked by enemies.

The game's levels consist of seven full zones, each comprising two regular acts and one boss act, and one final boss zone that is only accessible to the player if Sonic has collected all Chaos Emeralds. Interestingly, Sonic 3D Blast follows Sonic CD's convention of using alliterations for zone names.

This tropical zone is typical of the first zone in a Sonic game. Waterfalls, bridges and loop-de-loops adorn Sonic's journey as he speeds across the checkered floor in search of flickies. In the boss fight, Robotnik tries to drop a spiked ball on Sonic from his hovercraft and can be hit when he descends to collect it.

An ancient ruins zone in the vein of Marble Zone from the original Sonic and Marble Garden Zone from Sonic 3. Certain tiles put Sonic into a special twirling state that allows him to smash through certain otherwise unbreakable obstacles. The boss fight requires Sonic to jump onto the claws of a large statue in order to reach Robotnik who resides in its head.

Spring Stadium Zone plays yet another Sonic cliché rather straight, fulfilling the role of the mandatory pinball level. Sonic ricochets off bumpers, pops balloons and shoots off flippers as he makes his way to the end of the zone, where Robotnik chases him with a hovercraft equipped with spiked claws.

In sharp contrast to the preceding level, Volcano Valley Zone has Sonic navigating a lava level reminiscent of Lava Reef Zone in Sonic & Knuckles. Destructible rocks reveal hidden passages in this volcanic maze where Sonic must jump over broad pools of magma and avoid many a fire-spewing trap. The fire shield (red) is particularly useful in this zone. In the boss arena, Sonic must outrun a tongue of flame as he aims hits at a very stationary Robotnik.

A largely mechanical level filled with industrial fans and dangerous electric traps. The lightning shield (blue) is particularly useful to avoid getting Sonic electrocuted. The boss involves our hero dodging mines on a large treadmill as Robotnik fires missiles at him from his hovercraft.

Another industrial themed level, Panic Puppet Zone is special in that Sonic frees flickies from special containers rather than from Badniks. The boss for this zone, and the final boss if Sonic does not have all the Chaos Emeralds, requires Sonic to advance through several tiers of battle mechanics.

The last boss of Sonic 3D Blast is a deadly machine, naturally crafted in the likeness of its master, which chases Sonic through a series of puzzles that loops until the hedgehog is able to land enough hits on the contraption.

The Genesis/Megadrive version Sonic 3D Blast was eventually made available for purchase and download through Nintendo Wii's Virtual Console service. However, the game was criticized in reviews, one reason being that the game can't be played using the control stick, even if you use a Classic Controller to play it. Using the control stick doesn't do anything; only the directional pad would work. (It is unknown whether the fault lies with the Virtual Console platform itself rather than the people who ported Sonic 3D Blast to it.)

The music in the game was composed by Jun Senoue, Masaru Setsumaru, Seirou Okamoto, and Tatsuyuki Maeda. They all crated the Genesis version's music, while the Saturn/PC version was composed by Richard Jacques. The Mega Drive/Genesis version's soundtrack was somewhat latter used in other Jun Senoue projects; the music in Sonic Adventure had some elements of the soundtrack. The game over and continue themes were reused from Sonic 3 and Sonic & Knuckles.

Soon after the release of the Genesis Sonic 3D Blast, a technique was discovered to get to a debug mode, the technique was to tap the side of the Sega Genesis with some slight power with your finger, has in flicking it, soon after the screen would make a screech and then turn blue, after 2 seconds a menu would pop up allowing the player to select any level in the game with has many lives has the player wanted - http://www.youtube.com/watch?v=tp1uTXPNlzE 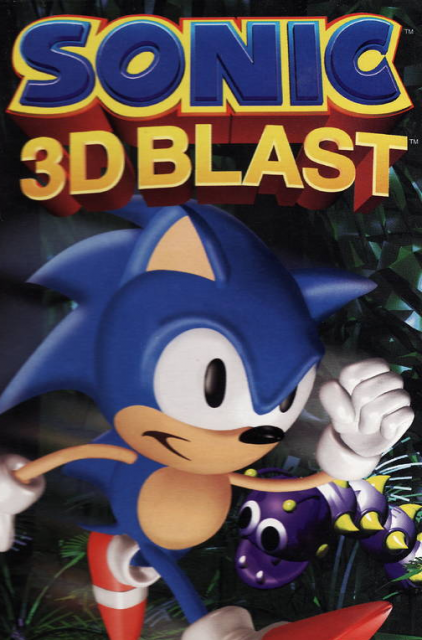