Dark Colony is an RTS released in 1997  by SSI and GameTek for Windows and Mac OS.  It is set on Mars in the year 2137, where humans have discovered that grey aliens (called Taar) have nefarious plans for them, and must be stopped.

Dark Colony is a fairly standard "me-too" game in the vein of Starcraft.  Players must build bases, mine resources, and produce units to defeat other players.  There are two playable races, Humans and Taar.   Each race has nearly identical units, differently mainly in appearance.  Most notably, Dark Colony was one of the first RTS games to feature a day/night cycle, and each race gains advantages or disadvantages based on what time it is. 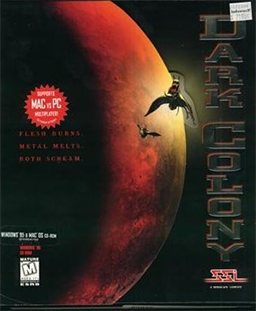