A game that combines two different genres, a dating sim and a sound novel.

Kohni Shogun (高2→将軍) is a title developed by Rythmics for the PlayStation and published in Japan by Ask on October 26, 2000. Years later Kohni Shogun was re-release of the PlayStation Network by Hamster Corporation as a PSOne Classic on December 8, 2010.

The game is a combination of a dating sim in the tradition of Tokimeki Memorial and a sound novel similar to Kamaitachi no Yoru. Set in then modern day Japan, the beginning of Kohni Shogun takes place in the year 2001 and plays as a typical dating sim where the protagonist, a young man in high school, can interact with several potential female love interests all while trying to become more desirable by completing exams that will increase various stats. However, as time passes ingame and the player reaches the year 2003, the protagonist falls into a portal that teleports him back in time to medieval Japan where the gameplay and presentation makes a abrupt shift to that of a sound novel, with text covering the entire screen, characters being represented by colored silhouettes and the player interacting only to make choices that determine the game's ending. 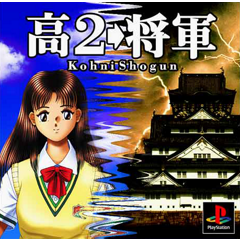