Considered one of the best side-scrolling shooters of the 16-bit era, Thunder Force III was an intense, innovative and great-looking shooter for the Sega Genesis.

Thunder Force III was a side-scrolling shooter released for the Sega Genesis in 1990. It is a direct sequel to the highly-regarded Thunder Force II and takes place 100 years after. The game tasks the player with piloting the Galaxy Federation's heavily armed Styx fighter against the dastardly ORN empire in an effort to destroy the defense installation Cerberus. Cerberus was in turn controlled by the ORN empire's leader, the bio-computer Cha Os. Battling through five stages in whatever order the player selects, the final multi-part level involves the infiltration and destruction of Cerberus from the inside, in order to end the war and return peace to the galaxy.

Thunder Force III was also fairly innovative, featuring multi-direction scrolling, a variety of selectable weapons replete with up to two CLAWs (similar to Gradius' options), and allowing the player to determine in which order the game's six stages are to be tackled.

Thunder Force III was ported over to arcades (Sega System C) during the same year, under the name Thunder Force AC. The following year, it was ported to the SNES, with the title, Thunder Spirits. 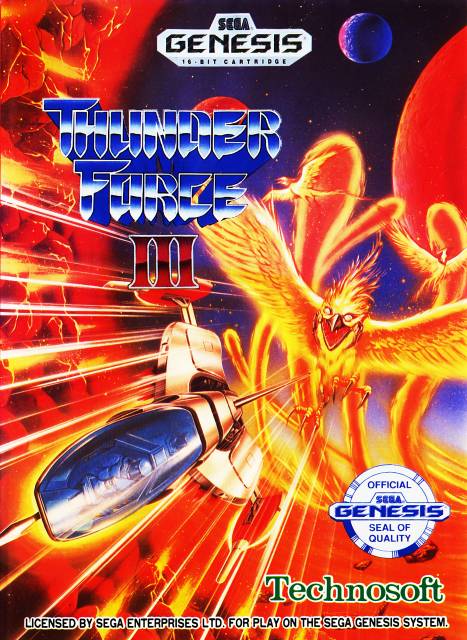