Virtua Fighter 5 is a 3D fighting game developed by Sega-AM2 and released by Sega for arcades (using their PC-based Lindbergh hardware) in Japan on July 2006. It received a limited worldwide release on February 2007, with online features removed.

The fifth main installment of the Virtua Fighter series, Virtua Fighter 5 adds two new playable fighters (Chinese opera dancer Eileen and Mexican luchador El Blaze) and updated gameplay mechanics (such as the addition of the evasion-based "Offensive Move" technique and the "Clash System"). It also continues the series' trend of using one of the most powerful arcade boards at the time to render the most highly-detailed graphics for its time (with this iteration introducing high-definition widescreen resolution, High Dynamic Range, and model self-shadowing).

Along with the online connectivity and custom player data features of Virtua Fighter 4 (now part of Sega's ALL.Net service), the Japanese arcade version of Virtua Fighter 5 featured an enhanced ranking system and two special dedicated machines: "VF Terminal" (which allowed players to manage their card data) and "VF.TV" (which broadcasts competitive matches to a screen for spectators).

The "Ver. B" version was used as a basis for the PlayStation 3 port, which was released in Japan on February 8, 2007, in North America on February 20, 2007, and in Europe on March 23, 2007. The "Ver. C" version was later used as the basis for the Xbox 360 port, which was released in Europe on October 26, 2007, in North America (as Virtua Fighter 5 Online) on October 30, 2007, and in Japan (as Virtua Fighter 5: Live Arena) on December 6, 2007. Both versions of the game feature a dedicated "Quest Mode" (where players fight numerous fake players from fictional arcades to earn costume parts), while the 360 version features online multiplayer (a first for the series).

As a 3D fighting game, characters can walk around the arena by moving away from the camera (by holding upward on the joystick) and moving towards the camera (by double-tapping, then holding, downward on the joystick). By performing a quick tap on either direction, players can perform a special "Defensive Move" technique to dash in either direction and evade most attacks and combos.

Some new additions to the game include:

In addition to standard versus matches, the game includes the following modes:

The game's standard single-player Arcade Mode, where players face-off against seven CPU opponents (with a bonus match against Dural at the end). Players are both timed and ranked by score.

Added in Ver. B, Knockout Trial is a single-player mode where players face-off against teams of eight computer opponents, with each opponent resembling real-life players (with varying difficulty, play style, and player data) to give the illusion that they are fighting against human opponents. Each team has one "boss" opponent, who is the most difficult and is fought last.

Ver. D revamped the mode into "Knockout Trial 2", which is now pirate-themed. It also includes "mysterious pirate" opponents that can challenge the player.

Added in Ver. C, Bingo Festa was a limited-time event where each player had access to a bingo card and earn numbers to fill the card after each match to win prizes. There were three separate types: "Hitori de Bingo!", "Omise de Bingo!", and "Zenkoku Issei Min'na de Bingo!"

Added in Ver. D and used for in-store tournaments. Players earn "battle score" by defeating opponents and are ranked for that tournament, with higher-ranked players earning prizes.

In addition to standard versus matches, the game includes the following modes:

In the Home versions of the game, there are two types of Arcade Modes: Normal and Score Attack. Both work pretty much the same: the player chooses a fighter and progresses through the game before a bonus round with Dural. Score Attack, however, always uses the default settings and players are ranked on leaderboards.

Players with custom character data can use the Customization Mode (which is also accessible in Quest Mode) to customize their character's appearance, emblem (icons that show up next to your name in matches), and pre-fight quote.

On certain occasions in VS. Mode and Quest Mode, battles turn into Item Battles, which contain a treasure chest. Defeating that opponent earns the player whatever is in the chest, whether it's gold, an item, or a disc orb. Whenever players collect seven disc orbs, they will receive a special item. Players can use gold to buy new clothing items for their character in the Item Shop.

The main single-player mode in the PS3 and X360 versions of Virtua Fighter 5 is Quest Mode, which builds on the Knockout Trial mode in the arcade version by having players simulate playing in Japanese arcades. Players use their character data to travel through many arcades, defeating rivals and participating in tournaments. There are hundreds of rivals to play against, each varying in difficulty, play style and character data (including appearances, emblems, and pre-fight quotes).

The locations include the Home (which allows you to adjust certain settings and check Quest Mode status), the Event Square (where "official" big tournaments are held), and seven arcades, each with over 130 unique computer players varying in ranking. Each arcade has three free units with an opponent. On some occasions, arenas would have small tournaments with prizes of either gold, an emblem, or an item.

There are three types of stages in the original release of Virtua Fighter 5: Open, Half Fence, and Full Fence (also known as Open, Fence, and High-Fence). Each vary in size (shown here in meters) and difficulty to get knocked out of the ring.

Each character has their own corresponding stage, which is used when fought against them in basic Arcade modes. In other modes, they are either randomized or player-selectable. The Dojo stage, added in the Home versions, can use all three types of stages and must be unlocked before-hand (by completing Command Time Attack mode with any character).

These stages have large-sized squared arenas and no fencing, allowing players to easily ring-out opponents by attacking them (or by having them step out of the arena accidentally).

These stages have average-sized squared arenas and have fencing reaching up to each combatant's hip. Players can knock opponents out of the arena by juggling them.

These stages have small-sized squared arenas and impenetrable full-size walls, preventing players from knocking opponents out of the arena and allowing special wall-based techniques. 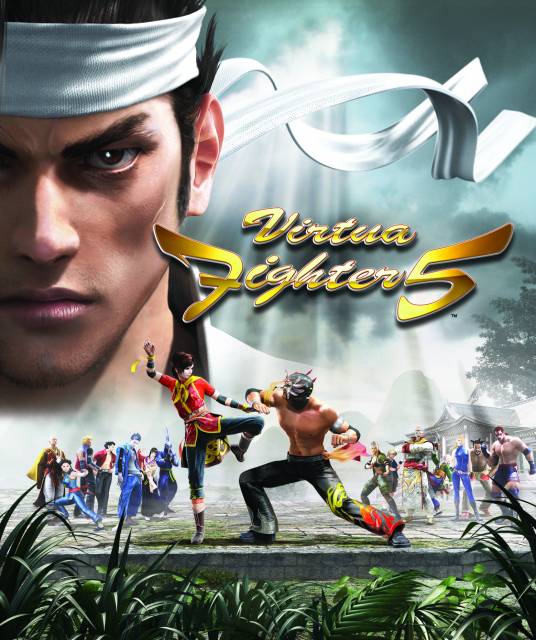