Star Wars: Battlefront II (not to be confused with the 2017 game of the same name) is a sci-fi team-based shooter developed by Pandemic and published by LucasArts for the Xbox, PlayStation 2, PlayStation Portable, and PC on November 1, 2005.

The game's main campaign, titled Rise of the Empire, chronicles a detachment of Galactic Republic Clone Troopers known as the 501st Legion through the final battles of the Clone Wars. It then follows the 501st (as Galactic Empire Stormtroopers) as they become Darth Vader's personal army (also known as "Vader's Fist").

Due to the shutdown of the GameSpy online service, the PC version's online multiplayer was discontinued on July 25, 2014. It was later restored on October 4, 2017 with crossplay support between Steam and GOG versions.

A limited demo of the Xbox version is included in the 2005 DVD release of Star Wars: Episode III - Revenge of the Sith.

Similar to the original game, players can choose from multiple different infantry Classes, each with their own range of weaponry and utility. Unlike the original game, however, the four base Classes remain mostly the same between factions:

Each faction also has two Special classes to choose from, each with their own unique abilities and weaponry. Players must unlock them in each match beforehand by acquiring points, and teams can only have a limited amount of each Special class in-play.

Their base units are the Super Battle Droid (soldier), Assault Droid (assault), Assassin Droid (sniper), and Engineer Droid (engineer). The Super Battle Droid is unique, however, and is equipped with a Wrist Laser (which fires similar to a Blaster Rifle) that can be configured into a Tri-Shot (similar to a Blaster Pistol, but fires three shots at once) and a Wrist Rocket (which have less carrying capacity but is shot like a Rocket Launcher).

On dedicated Space Maps, players are limited to only two infantry class options (each with no gameplay difference between factions):

New to the game is the opportunity to play as unique Hero classes (as they were NPCs in the previous game). Only one player per team can play as their team's Hero at the time, and determining whoever gets to play as them is based on the server settings. Players can then respawn as that Hero.

Heroes have unique lifebars (stylized as lightsabers) that slowly deplete and can only be healed by killing enemies. They are tougher to eliminate and have unique abilities.

By default, the first Hero on the team is determined after a player scores 10 points (in which the highest-scoring player, usually that same Hero, gets to become the Hero). After the Hero is eliminated, the game waits for 90 seconds before choosing a new Hero. Server operators can change the Hero choice (including worst-scoring player and random player), the time to choose another Hero after the previous one's elimination, and when to choose the initial Hero (including an initial timer).

Most of the Heroes in the game are Force users, granting them unique powers at a cost of a forced third-person perspective. They are always equipped with a melee-focused lightsaber (with some characters using multiple lightsabers or doublesabers), with combo attacks costing part of the character's energy gauge.

In addition to special abilities (which function similar to the explosive/utility item slot), Force users can toggle a blocking stance to deflect incoming blaster fire with their lightsabers (using the Change Weapon button), use Force Jump to perform an additional mid-air jump, and run very fast (allowing them to perform a powerful running strike). All of these abilities are dependent on the character's energy gauge.

Returning from the original game, Conquest is the game's main mode. Each team has a finite amount of Reinforcements, and must deplete the other team's Reinforcements to win (through both killing enemies and controlling a majority of Command Posts, or CPs, scattered throughout the battlefield).

Each battlefield has a certain amount of capturable CPs (usually five), which serve both as a spawn point for the controlling team and as a way to score points (as controlling the majority of CPs slowly deplete enemy Reinforcements). CPs can only be captured by standing near them for a short amount of time. Enemy CPs take longer to capture (as it must be brought back to its Neutral state beforehand). Enemy players can contest the capture of Neutral CPs by standing near them.

If all CPs are captured at once, enemies cannot spawn and the game triggers a countdown timer of 20 seconds. If the enemy team does not capture a CP before the timer runs out, the controlling team wins the match automatically (regardless of Reinforcements).

By default, all Ground maps are playable in this mode.

While most of the critical support systems can only be damaged after disabling enemy Shields (by bombarding with starfighters), some can be damaged from inside the enemy Carrier after boarding the enemy hangar (which is risky due to resistance from enemy pilots and turrets). The Life Support System can only be destroyed from inside, while the Engine Cooling Tanks destroy both Engines at once.

Some other systems that can be destroyed (for no additional points) include the Auto-Defense Mainframe (which disables auto-turrets) and the Shield Generator (which disable regeneration of the Carrier's shields).

By default, all Space maps are playable in this mode.

Standard capture the flag mode. Teams earn points by grabbing the enemy flag and returning it to their capture zone near their spawn.

Flag wielders cannot use their special movement or cloaking abilities.

Capture the flag with a twist: a single neutral flag is located in the center of the battlefield, and teams earn points by grabbing it and bringing it to the capture zone near the enemy spawn.

Flag wielders cannot use their special movement or cloaking abilities. In space battles, players can only pick up and carry the flag while in a starfighter.

By default,, all Space maps and the following Ground maps are playable in this mode:

Team deathmatch with a twist: each team is restricted to specific units based on the map (with the exception of the Rebel Alliance in Hoth and Rhen Var). It is the only mode where certain NPCs (such as Ewoks and Jawas) are playable (each with their own unique weapon loadout).

Team deathmatch with a twist: players can only control Heroes, with one team controlling Republic & Rebel Heroes and the other controlling CIS & Empire Heroes. Unlike standard modes, Heroes have a standard lifebar that does not deplete automatically nor replenish with kills.

The following Ground maps are playable in this mode:

Fall of the Old Republic

Rise of the Empire

Returning from the original game, Galactic Conquest is a turn-based strategy mode where two sides (either Human vs. CPU or Human vs. Human), each using a particular faction, attempt to dominate the galaxy by taking control of all planets with skirmishes that happen during each turn. Similar to the original, players on console versions can play this competitively or co-operatively via split-screen multiplayer.

Unlike the original version, where players simply activate a planet's battlefront, this version requires players to build and maintain fleets of starships and maneuver them around the map. Fleets can be used to invade hostile planets (capturing them on victory or destroying the Fleet on defeat) and to attack other Fleets (destroying the losing Fleet).

Also unlike the original version, the game uses a currency system (called Credits) that can shift the tide in the tug-of-war match for the galaxy. Credits can be used to purchase Bonuses (replacing planet-based Bonuses from the original version), unlock Units (as players start with a minimal selection of infantry Classes), and purchase new Fleets. Players earn Credits by participating in skirmishes (with the winning side potentially gaining more Credits than the losing side).

On each player's turn, that player may purchase with Credits and then either skip their turn or move a Fleet. If the Fleet is moved to an enemy-controlled planet or an enemy Fleet, each player picks a Bonus to use (with the attacking player picking first) and the game proceeds into a skirmish:

Each side starts off with only two classes at their disposal: their Soldier class (for Conquest battles) and their Pilot class (for Space Assault battles). During their turn, they may choose to spend Currency to unlock additional class types for all subsequent battles in the campaign. Assault, Sniper, and Engineer classes cost 1000 Credits each, Special classes cost 1800 Credits each, and the Marine class cost 800 Credits.

During their turn, players can also choose to purchase one-use Bonuses to aid them in battle. Each side has three slots for Bonuses, and players who have all three slots filled can choose to replace one of them with a new Bonus (wasting the old Bonus in the process). There are nine Bonuses that can be purchased:

New to the game is the Awards system, which tells the player when they've performed a special feat (such as multiple kills in a single life). They also gain special perks by achieving the same Award multiple times throughout their overall career: 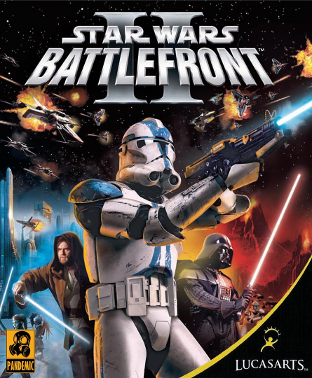