Dragon Quest V is a turn-based RPG released in 1992 and is the fifth installment in the popular Dragon Quest series. It is also the second entry in the Zenithia Trilogy, and one of the most popular games in the franchise.

Dragon Quest V is the fifth installment in the popular RPG series, Dragon Quest, and was developed by Chunsoft and published by Enix Corporation. Dragon Quest V was the first Dragon Quest game to appear on the Super Famicom (the Super Nintendo in the United States), released on September 17, 1992.

A remake developed by ArtePiazza and Matrix Software and published by Square Enix was released in 2004 on the PlayStation 2. A Nintendo DS remake was released on July 17, 2008 in Japan, and February 17, 2009 in the U.S. This was once again developed by ArtePiazza and published by Square Enix and was the first time any version of Dragon Quest V was available in the U.S. and Europe.

Dragon Quest V takes place over roughly thirty years of the main character's life, from when he is born through to when he gets married and has a family. Dragon Quest V offered a new feature in the Dragon Quest series in which some monsters in random battle sequences will ask to join the player's party. This was later used in the spin-off series Dragon Quest Monsters (which is also seen as the spiritual predecessor to Pokemon). Dragon Quest V is frequently regarded as one of the best RPGs of all-time, placing 11 on Famitsu's top 100 games of all-time.

The game's monster-collecting concept has since become influential, appearing in many later franchises such as Pokémon, Digimon and Dokapon. In turn, the concept of collecting everything in a game, in the form of achievements or similar rewards, has since become a common trend in video games. Dragon Quest V has also been credited as the first known video game to feature a playable pregnancy, a concept that has since appeared in later games such as Harvest Moon, The Sims 2 and Fable II.

Dragon Quest V generally offers the same gameplay expected from the Dragon Quest series. The characters level up by gaining experience points earned in battles (that take place in first person). The new feature added into this installment is the ability to tame monsters. The monster joined the player's party and leveled up in the same way that all the other characters do. However, certain monsters have a lower level cap (i.e. the Great Dragon recruit caps at level 60). The Super Famicom version has 40 different tamable monsters while both the PlayStation 2 and Nintendo DS version offered more.

Dragon Quest V takes a change from the previous two entries in the series (III and IV) in that it only allows the player to have three players active in their party, while both III and IV allow four. The remakes once again allowed four active characters in their party.

The story of Dragon Quest V spans 20 years (split into three generations) during which the player can marry and have children. There is no one big goal that the characters of Dragon Quest V are sent out to do. The game is more of just an adventure where the player will run into my obstacles along the way. However, about halfway through the game, the hero finds his mother kidnapped and transformed into a monster by Mildrath. For the rest of the game after that, finding the hero's mother is the main goal. One of the biggest story elements in Dragon Quest V are the time leaps the game takes. The game starts out with the player character as a child, later flashes forward to when the protagonist is a young adult where he marries, afterward, the game leaps forward to the protagonist adventuring with his children.

The PlayStation 2 remake was released on March 25, 2004. The game sold 722,000 copies on the first day and sold 1.5 million in its first month of release, making it the best selling Dragon Quest remake of all-time. The remake was developed by ArtePiazza, the former art directors of Dragon Quest VII. Because of this, the game features 3D graphics very similar to Dragon Quest VII. The remake also upgraded the active players limit to four and added more tamable monsters. Another new feature is Yuuji's Specialty Museum, where the player collects various specialties from around the world and returns them to Yuuji for various rewards.

The Nintendo DS remake was released in Japan on July, 17, 2008. This version ran on the same engine as the Dragon Quest IV remake also on the Nintendo DS. The Nintendo DS version also introduced a third potential bride in Debora, Nera's older sister, who did not exist in prior versions of the game. Yuuji's Specialty Museum from the Japanese PS2 remake was localized as the Knick-Knackatory and featured the ability to trade knick-knacks through the DS's wireless capabilities. Dragon Quest V was released in the United States on February 17th 2009, and in Europe on February 20th 2009; this is the first time that Dragon Quest V has been available outside of Japan. 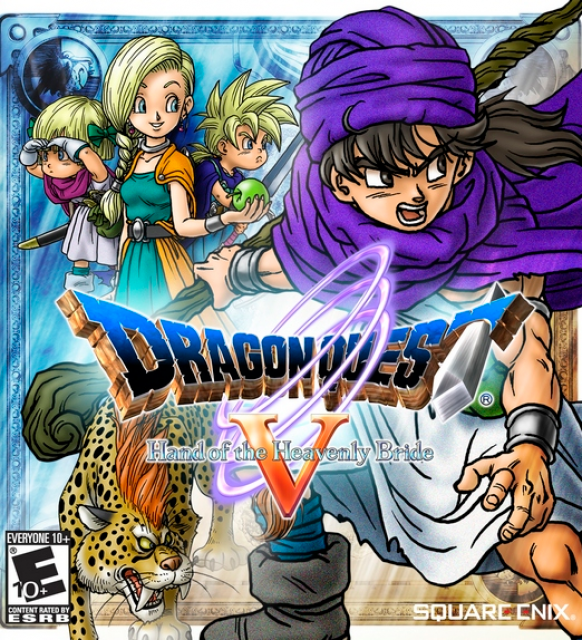