A side-scrolling shoot-'em-up similar to the studio's earlier R-Type, putting players in control of a microscopic fighter jet in a parasitized human body. Its main feature is the use of mechanized tentacles that maneuvers around the ship.

X Multiply (sometimes stylized as XMultiply or X∞) is a sci-fi side-scrolling shoot-'em-up developed and released by Irem for arcades in Japan on September 1989.

A spiritual successor to the 1987 game R-Type, X Multiply has players piloting microscopic fighter jet X-002 in the year 2249, where they traverse the inside of a human body infected by alien parasites.

Much of the game is similar to R-Type, including a similar power-up system and the use of an auxiliary support device. Rather than using a large orb unit (the Force), the game utilizes mechanical tentacles deployed from the ship to both shield it from projectiles and attack enemies (using a variety of lasers).

While the game received no sequels, the flexible tentacle system was later re-used as the "Flexible Force" in both R-Type Final and R-Type Final 2.

The game was later ported by Xing for the Sony PlayStation and Sega Saturn, coupled with Image Fight in the Japanese 1998 compilation Arcade Gears: Image Fight & X Multiply. The original game was later digitally re-released on August 8, 2019 for the PlayStation 4 and Nintendo Switch as part of HAMSTER's Arcade Archives series.

The game utilizes a standard one-button layout, with the button dedicated to firing the ship's weapons. Unlike R-Type, there is no charge-up mechanic for the main weapon and no dedicated button for the auxiliary device.

Unique to the game are two mechanized tentacles, which can be deployed by collecting a Weapon Capsule upgrade. These tentacles are indestructible, damage enemies by colliding with them, and fire weapons with the tips of each tentacle (in conjunction with the ship's main weapons).

Both the ship's weapon, as well as the tentacles' weapon, are determined both by their upgrade level and the last Weapon Capsule collected. By default, the ship fires small laser blasts straight-forward in a rapid-fire manner, and tentacles fire slightly larger blasts in a similar manner.

Players can acquire special power-up items for their ship by destroying a special enemy (the "Power-Up Item Holder"), then collecting the item they leave behind. All items are lost once the player's ship is destroyed. 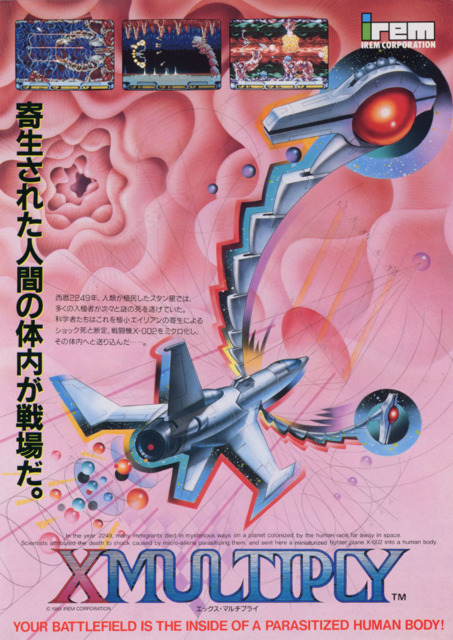