An arcade style TPS, which in 53 levels, pits you against giant ants, giant spiders, giant robots and UFOs. Luckily for you, the game has an arsenal of over 150 different weapons and 4 different vehicles, all collectible throughout the game. And don't forget, every building is destructible! And how.
Xbox 360

In Earth Defense Force 2017, you are given control of an Earth Defense Force (EDF) soldier part of the unit known as Storm 1. Your goal is to exterminate an alien race, known as the Ravagers, who are attacking Earth. The aliens are powerful and heavily outnumber the EDF. The game includes an arsenal of over 150 weapons to deal with the Ravagers, such as assault rifles, shotguns, sniper rifles, rocket launchers, grenade launchers, missiles, and a variety of others. To receive these weapons, the player must kill aliens, who then drop items such as new weapons, health and armor. Picking up health will increase your health instantly, while new weapons and armor will not affect you until the next level, where your health will increase (because of armor) and you will receive new weapons. Although you will always be able to find new weapons, the more effective ones will be found on the more difficult of the game's 5 difficulties, which goes from Easy, Normal, Hard, Hardest to Inferno. In harder difficulties, enemies are harder to kill, and they do much more damage than you. As such, Inferno (the hardest difficulty setting) is quite the challenge, but when completed the player is rewarded with the "Genocide Gun" which deals 1,000,000 damage a piece is your reward.

Aliens known as "Ravagers" are invading the Earth; it is your job to stop them. Take the opening cutscene for example:

"In the year 2013 radio waves were picked up from outer space, this was confirmation of Alien life.

In the year 2015 the Earth Defense Force (EDF) was formed, should the Aliens pose a threat, they would defend earth.

In the year 2017 the Aliens have attacked, it is up to the EDF to stop them" - This cut-scene, although short, is basically the entire plot of the game.

The game takes place all over Japan, but could easily be mistaken for any other metropolitan area. You'll find yourself sometimes in large cities, in ravines, underground and by the sea; but don't try exploring to far, for the game has an invisible barrier that will prevent excessive sightseeing. While in the large metropolitan areas, you will have the capability of destroying any and every building around you; this becomes an effective method of killing foes who insist on climbing them.

Earth Defense Force 2017 is an arcade-style third person shooter that can be played in either a single player mode or as two player, split screen co-op. The game consists of 53 levels across various settings such as metropolitan areas or underground caves where the goal is to destroy the invading aliens. While progressing through the levels, the player can pick up upgrades such as weapons crates that give access to new weapons, armor (which upgrades overall health), and health packs to help in the destruction of the aliens. There are over 150 weapons that can be collected in the game ranging from assault rifles and rocket launchers to lasers, as well as access to certain vehicles such as tanks and helicopters in various levels. The game also features destructible environments, meaning that virtually any building can be destroyed with the launching of a well placed rocket.

The game has 5 difficulty levels ranging from easy to inferno. The game encourages playing on higher difficulties by rewarding players with more effective weapons the higher the difficulty they play on. There is unlimited ammo on all weapons, however more powerful weapons (such as rocket launchers) require longer reload times when compared to weaker weapons such as assault rifles which will reload much faster. Additionally, players are only allowed to carry two weapons at a time, requiring players to choose their weapons appropriately depending on the mission. Weapon selection is extremely important because, unlike most modern games, the game does not let you change your weapons during a level.: Once you select your two weapons your stuck with them until you either A)complete the mission or B) Die. Friendly fire is also a concern during co-op, meaning that players have to be wary of their teammates when firing high explosive rounds at enemies nearby. There are no respawns and if one dies they have to wait until the next mission or their teammate dies until they can try again.

EDF 2017 has two multiplayer modes, consisting of a Cooperative campaign, and a two player versus "battle" mode. In the battle mode, two players can locally play competitively using guns and vehicles.

Assault Rifle - This weapon has a fast firing rate with a relatively low damage per shot, made up for by the fact that it is relatively accurate. It may not matter that you're doing only a small amount of damage with a single bullet when you're hitting with dozens each second. Used mostly for closer ranged battles, some of the scope equipped varieties can also be used for some mid-ranged sniping. There is also a special version of some assault rifle models called Bound Guns, which use special bullets that rebound off walls while retaining their full effectiveness.

Shotgun - Used for close combat, this gun works much like the assault rifle, but fires off a huge burst of bullets all at once. Earlier versions are inaccurate, but once you get to higher level weapons, such as those found on the "Hardest" difficulty, these guns can be both amazingly powerful and accurate. Bound Gun versions of some shotguns are also available, allowing you to ricochet bullets off buildings and walls to take down enemies around corners.

Sniper Rifle - Sniper rifles excel in long range combat, where their slow firing speeds and long recharge times aren't an issue. These generally have a long range scope and are incredibly accurate, allowing you to place a bullet precisely as desired hundreds of meters away. These are the most powerful weapons in the game, doing far more average damage per second than any other type.

Rocket Launcher - Rocket launchers are used for long ranged combat (with ranges exceeding 10x that of sniper rifles), and especially excel at taking out groups of enemies at once. These rockets don't home in on enemies, so they have to be fired somewhat accurately, but their blast radius allows them to damage or kill multiple bugs at once with a well placed rocket. This weapon's strength lies in splash damage, not power.

Missile Launcher - Used for taking down single targets, and are especially useful for flying enemies. Missiles home in on nearby enemies after a short flight time, allowing for precise strikes on fast moving enemies like gunships. They can also be used on the undersides of carriers, as long as you watch out not to hit the hatch armor plating when firing.

Grenade - Grenades are close to mid-range hand-held weapons that are lobbed in an arc at opponents. While these weapons seem to be rather weak at first, their utility comes into play in missions that take place in ravines and other areas with multiple levels. In these areas, you can lob grenades at opponents without worrying about counter-attacks due to the height difference between you and the enemy. There is also a special variety of grenade, called firecrackers, which do less damage per explosion, but split into dozens of smaller explosives to do damage over a larger radius.

Grenade Launcher - This weapon allows you to launch grenades a much further distance than they could normally be thrown, making the grenade a much more useful weapon in more generalized situations. This does sacrifice some of the ability to accurately place the grenade when it lands, however.

Acid Gun - These special weapons fire sprays or spreads of acid, burning away at the alien's armor. They act much like an equivalent assault rifle or shotgun, although they tend to have much less range, and their projectiles arc while flying through the air.

Flame Thrower - These weapons have extremely short ranges, but deal out massive amounts of damage to anything they touch with their flames. These weapons are dangerous to use, since getting close enough to use them means that the enemy can deal damage back easily, but a short burst from a flame thrower can put out more damage than almost any weapon in the game.

Bombs - Bombs are an interesting weapon, favoring a more hit and run style of combat than the other weapons in the game. These weapons are placed around the level, with the activation button exploding them when you finally decide to blow the charges. This lets you set up ambushes for groups of aliens, enveloping them in huge explosions while you are at a safe distance, placing more surprises for the survivors.

Turret - These weapons provide another interesting variation in play style and are one of the most useful weapons especially on higher difficulties. Rather than directly attacking the enemy, you can place these guns on the ground, then activate them at will, starting them tracking enemies and firing. They have a limited ammo supply, and will explode when they run out, allowing you to place more of them. This is another ambush style weapon, letting you kill from afar with your own weapon while letting these do the grunt work. All turrets have 20 second reloading time.

Earth Defense Force 2017 requires 1.6 GB of free space for installation on the Xbox 360. 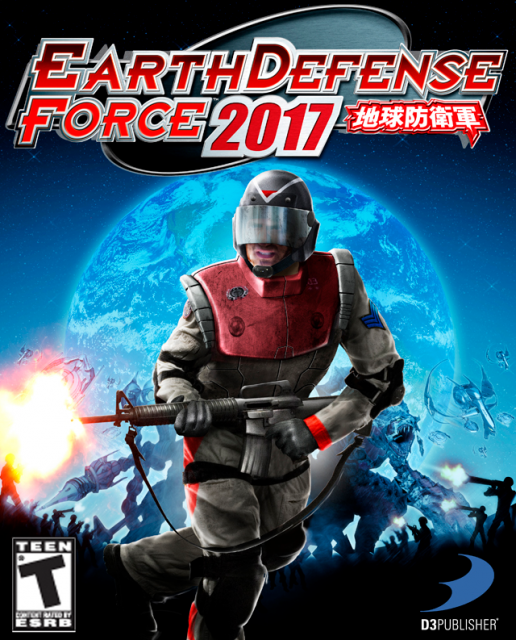