Red Ninja is a stealth action game in the vein of Tenchu. Developed as a collaboration between Tranji Studios and film writer Shinsuke Sato.
PlayStation 2

Red Ninja tells the story of Kurenai, who as a young girl witnessed her father murdered by the Black Lizard Clan and then was hung with a small wire to a tree. Kurenai was found hanging from the tree days later by Chiyome and somehow survives this experience. Chiyome takes in Kurenai and begins to teach her how to fight. Kurenai's weapon of choice becomes the "tetsugen" (essentially a knife attached to a wire) using the same wire that she was hung with. After mastering this weapon she sets out on a vendetta against the Black Lizard Clan for her father's murder.

Red Ninja is largely based around 3rd-person stealth gameplay, the goal being to either kill or distract enemies without ever letting them know that you are there. Kurenai's main weapon is the tetsugen, she uses this weapon by throwing the knife portion into an enemy and then ripping it out again once it has attached. Once an enemy's health is low enough, when she pulls the tetsugen out of a guard then he will either be decapitated, cut in half, or have his feet ripped off, depending on where the tetsugen was attached.

If Kurenai is being attacked by multiple enemies, then when she attaches the tetsugen to one guard and then rotates around him then she can hit other enemies as well with the wire. Kurenai can also use "kunai" (small knifes) as throwing weapons to either distract or kill a guard. By avoiding getting injured and kill multiple guards she will gain in her "Ninjutsu" guage. Once full, the player can use this to slow all everything down in the game, aka "bullet time".

Probably the most unique mechanic introduced in Red Ninja is the "Seduction Move". The seduction move will allow Kurenai to peak around a corner and get the attention of a nearby guard by doing a sensual pose of some kind which entices the guard to approach her. Once the guard gets close enough, Kurenai will quickly kill the guard without alarming anyone around.

A large part of Kurenai's stealth abilities revolves around the various acrobatics that she can perform. By using the tetsugen she can attach to various pillars or other holds to swing across the levels as well as run along walls for a short period. 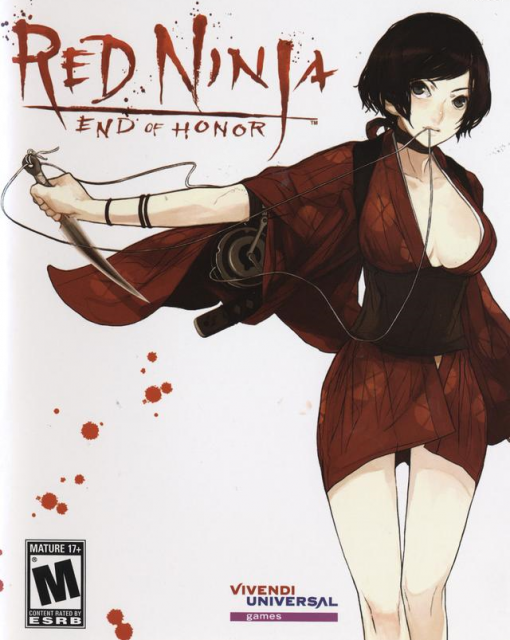