Phantasy Star is an 8-bit console RPG released for the Sega Master System in 1988. It was released in the same general time period as Square's Final Fantasy and Enix's Dragon Warrior, giving birth to the Japanese RPG genre. Phantasy Star featured many of the genre's staples such as a four-member party, turn-based combat, random battles, and several standard fantasy archetypes such as the warrior and the magic user. Phantasy Star differed from its contemporaries in a few distinct ways: dungeons were displayed in a first person perspective, the setting was science fiction, and the main character was female.

Phantasy Star was released in the U.S. as the most expensive home game to date, with a retail price of $80. Although it was technically released in the U.S. prior to Final Fantasy, the latter went on to enjoy much greater success due to the larger install base of the Nintendo Entertainment System.

Phantasy Star takes place in the Algol star system, which is composed of three planets: Palma, Motavia, and Dezoris. The game starts on Palma, which is a temperate planet with oceans, mountain ranges, and lush forests. Motavia and Dezoris, which are traveled to later in the game, are desert and ice planets, respectively. The Algol system is ruled by King Lassic, who resides in a floating castle above Palma.

The game begins in Space Century 342. Following the discovery of space travel 200 years earlier, there was a long period of peace and prosperity as the native Palmans began to visit and colonize the barren worlds of Motavia and Dezoris. But then, a nebulous and nefarious force appeared in the Algol system. It bore the guise of a new religion, promising immortality, and the elderly King Lassic became its first convert. Not long after, terrible monsters began roaming the wilderness of the Algol planets, the dead rose from their graves, and King Lassic started mercilessly oppressing his subjects. Lassic had become an evil necromancer, and a young man named Nero swore to vanquish him. But Nero was overwhelmed by Lassic's many powerful robotcops and slain.

At the start of the game, the player takes the role of Alis Landale, a teenage girl who witnesses the murder of her brother Nero by King Lassic's enforcers. Prior to his death, Nero tells Alis to find Odin, a legendary warrior who can help her in her quest for revenge. From there the player engages in quests that eventually bring Odin, a feline creature named Myau, and the Esper Noah together in an effort to overthrow King Lassic. Later in the game, foreshadowing leads the player to believe there may be even more to the story. Players eventually build a starship, a hovercraft, a land-rover and an ice drill to traverse the different planets' environments.

The main characters in Phantasy Star are:

Gameplay in Phantasy Star contains most of the common staples of the genre. Overworld exploration is done via a top-down viewpoint, and random encounters are engaged while moving across the map. Battles take place in a first person perspective, with only the monster and battle interface visible. Visual cues such as laser beams, magic streaks or weapon slashes indicate the player is attacking, and the player's foe shows a small amount of animation to indicate their actions. Phantasy Star limits the battle to a single monster type, with multiple monsters (of the same type) being represented by a single animated representation. A menu in the upper right corner of the screen shows the player how many foes they are facing as well as their respective hit points.

Dungeons are presented in a first-person perspective and are laid out on a grid pattern. Movement in a dungeon is done one step at a time, with a chance of engaging in battle on each step. Dungeons feature trap doors that can drop the party multiple floors, and no indicators for direction or floor are available, leaving the player to handle mapping dungeons outside of the game itself (likely using graph paper). Combat within a dungeon is similar to combat on the overworld. 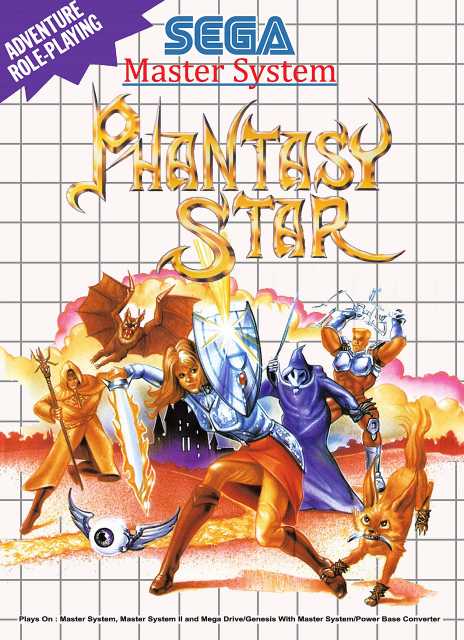