An epic RPG from Final Fantasy creator Hironobu Sakaguchi that follows the journey of three friends - Shu, Kluke and Jiro - as they use newfound magical powers to challenge the evil, tyrannical wizard Nene.
Xbox 360

Blue Dragon is a game with some heavy duty pedigree. Hironobu Sakaguchi and Nobuo Uematsu (Both the creator of Final Fantasy and composer of Final Fantasy Music respectively) are at the helm with Character designs by Akira Toriyama, well known for his work in Dragon Ball Z.

Blue Dragon is a RPG for the Xbox 360 centered around the adventures of a 16 year old boy named Shu, his friends, and their Shadows which can materialize at will in the forms of powerful monsters to do battle with their enemies. The primary goal of the game is to stop the villainous and extremely old Nene from further plaguing the world with his evil. He can be described as someone almost solely responsible for all the worlds ills, and has been doing so in his Flying Fortress of Doom since a distant era in the forgotten past.

In true classic RPG fashion, the player takes a band of unlikely heroes and progress through dungeons full of enemies accruing items and experience and uncovering more of the story along the way. Characters' Shadows can be evolved along several different ‘Jobs’ or branches of expertise such as Sword Master, Monk, Assassin, Guardians, Generalists, White Magic Users, Black Magic Users, Support Magic Users, and Barrier Magic Users. All of which have different roles and all of which can unlocked as the game progresses. It is a single player game with no multiplayer component.

The impulsive Shu, the bookish and calm Jiro and the kind and good-natured Kluke are a trio of young friends in the village of Talta. One day, portentous purple clouds descend on their village, which are purported by common wisdom to bring about the destruction of everything they touch. True to form, the village is immediately attacked by a lethal "land shark", which Shu, Jiro and Kluke attempt in vain to ward off with a massive net and traps. They are eventually carried off by it into a nearby cave where they discover that it is actually mechanical in nature: What the game calls a "mechat". Before they can react, the mechat land shark carries them off to a floating mechat base where they encounter Nene for the first time. After some villainous dialogue, Nene roundly defeats the trio and throws them off the floating base to their apparent demise.

They are saved by a beam emitted from a different area of the base and given spheres to swallow by a mysterious voice. Though initially reluctant to acquiesce with the voice's commands, they are eventually forced to when cornered by a massive unit of mechat soldiers. They immediately notice the change the spheres have caused them - each now has a powerful "shadow" creature protecting and fighting for them - and successfully escape the floating base to a desert below.

Heading back towards Talta, picking up the friendly and quick-tempered Marumaro of the bat-like Devee race along the way, they discover that the population of Talta is relocating to the nearby kingdom of Jibral, where they hope they will find safety. The party escort them along the way with their new shadow powers but are overwhelmed just outside of Jibral's borders. The benevolent King Jibral, his coolly competent lieutenant Zola (who also has a shadow) and a force of his royal troops manage to save the party and the other refugees.

As thanks, the party assists the King in his successful plan to destroy a nearby mechat base, but in the process Kluke is captured and receives a collar that is set to explode from Nene should the party interfere in his business any further. However, this is revealed to be a ploy to bring the other shadow-users to him as Nene manages to trap the whole party with collars and steal all their shadows. A considerably stronger Nene effortlessly defeats the party and almost kills them, but Shu is somehow able to teleport the party away to safety.

After teleporting the team finds itself in Devour Village, which is surrounded on all sides by deadly flora the party is unable to fight in their current state. Despondent, the group settles into the village, except for Shu who spends a considerable amount of time in training until his shadow powers slowly return. He helps the group escape Devour and chase Nene. One by one, the others regain their powers as well.

Nene meanwhile has sundered the world with his ancient technology and has escaped to a cuboid structure in the centre of the now split world. Zola takes the team to him on a mechat and it is revealed that she was (reluctantly) working with Nene the whole time, as he was the one who saved her life and supplied her with a shadow. It was also his idea that Zola spy on King Jibral from within his inner circle. Encouraged by the youths and their open defiance of Nene, she reveals that she was the voice that saved them all and initially gave them their shadows. Together with the group, she defeats Nene once and for all. Unfortunately, the true threat is revealed to be Nene's pet Deathroy - actually Destroy, an ancient bio-mechanical weapon intended to annihilate the world. The group manage to defeat Destroy and escape the cube to join their families in Jibral, yet the world remains sundered as of the game's conclusion.

Battles play out in a system where each combatant gets a place on a queue starting with the fastest and moving down to the slowest. They each act in turn, and when they complete an action they move to the bottom of the queue. They may act again when everyone else has a turn. Combat actions include a ‘ Charge’, which is essentially charging up and delaying an immediate attack for a more powerful one later on. Other actions in combat include the traditional Strike (A basic attack), Defense (to help minimize damage taken that turn), a Skill move (such as Stealing monsters items), Spells (using some magic to hurt or heal for example), Items (Such as potions that buff, heal , debuff, etc), changing formation (moving a character up to do more damage or back to fortify defense), and ‘Flee’ (to escape the battle, if possible). Later in the game each character also has a 'tension' meter which fills when the character either inflicts or receives damage, once filled the character can unleash their shadow's Corporeal attack (a high damage special move).

Blue Dragon has an Anime composing of 51 episodes that follow the basic premise of the game but with an expanded storyline and additional characters not found in the game itself.

Blue Dragon Ral Grado was a Manga (Otherwise known as a comic book) drawn by Takeshi Obata, illustrator of the popular Death Note Manga and Anime. It’s story is completely different to the game, although it takes place in the same world.

09 - Mystery of the Ancient Machine

23 - Revival of the Ancients

27 - Waterside ~for Piano and Orchestra~

It is also worth noting that almost all boss fights have the same electro hair metal theme music, which many reviewers noted as disappointing. 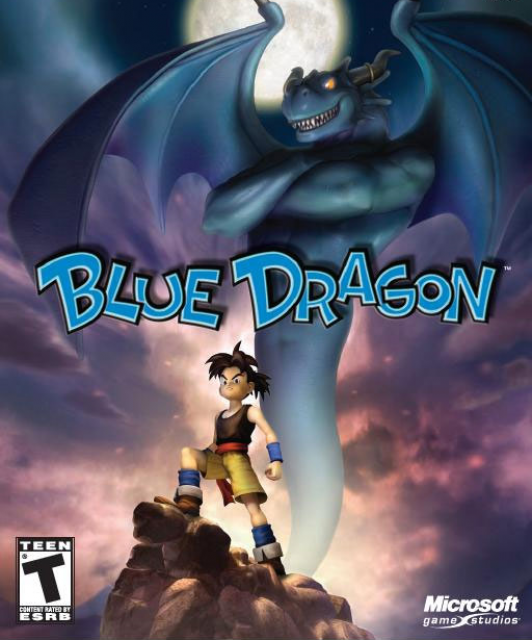