The third main installment of the well-known first-person shooter series, Call of Duty 3 returns to World War II Europe in an inter-connected campaign that switches between America, British, Canadian, and Polish forces during the liberation of France.
PlayStation 2 Xbox 360

Call of Duty 3 is a historical-military first-person shooter developed by Treyarch and published by Activision for the Xbox 360, Xbox, and PlayStation 2 on November 7, 2006. It was later released for the PlayStation 3 and Wii on November 14, 2006.

The only main Call of Duty installment to not receive a release on the PC, Call of Duty 3 is the third main game in the series (and the first main game that is developed by Treyarch). Unlike previous entries in the series, the game's story is focused on a single World War II campaign (namely the liberation of France from Nazi forces) as told through numerous Allied factions (including the US, British, Canadian, and Polish armies).

All versions of the game, with the exception of the Wii version, feature online multiplayer for 16 players (32 in the 360 and PS3 versions).

The Xbox 360 version was later made backwards compatible with the Xbox One on September 22, 2016.

Call of Duty 3 features a World War II FPS based campaign in which you play in four factions, there's the American campaign, British campaign, Canadian campaign, and the Polish Campaign. The Americans attack from the north while the British, Canadian, and Polish forces attack from the south. The plot of the game is the liberation of France from German forces and the story of soldiers from the different playable factions. All together, these 4 campaigns span across 14 chapters:

Call of Duty was more well known for its multiplayer, rather than the Single Player. Call of Duty 3 featured class based multiplayer. The game modes are Battle, Team Battle, War, Capture-the-Flag (CTF), Single CTF, and Headquarters. Battle is your traditional death match, Team Battle is basically Team death match, War is when there are flags all over a map and you must take control of each flag before going onto the next flag, capture the flag is when you basically try to capture the enemies' flag and bring it to your own base. Single Capture the flag is the flag spawning at the center of the match and you must take the flag to the enemy's base. Headquarters is when a radio spawns randomly at a map and the team who captures the radio makes a base there and protects the base, the opposite team has to try to take down the base, you get 1 point for every second you hold the base, usually the first with 300 points wins the match. All of the Single Player maps were available in multiplayer, through one form or another. There were also vehicles including tanks, cars, and motorcycles, which was a new feature for a Call of Duty game in multiplayer.

The game has been quite heavily edited to pass verification in Germany. As such, there are no swatikas or Schutzstaffel symbols in the game. The team select menu does not contain the word Nazi either. Instead, it allows you to select between Axis and Allies. The symbol used for the Axis is the Nazi war flag, which contains the iron cross, but no swastika. 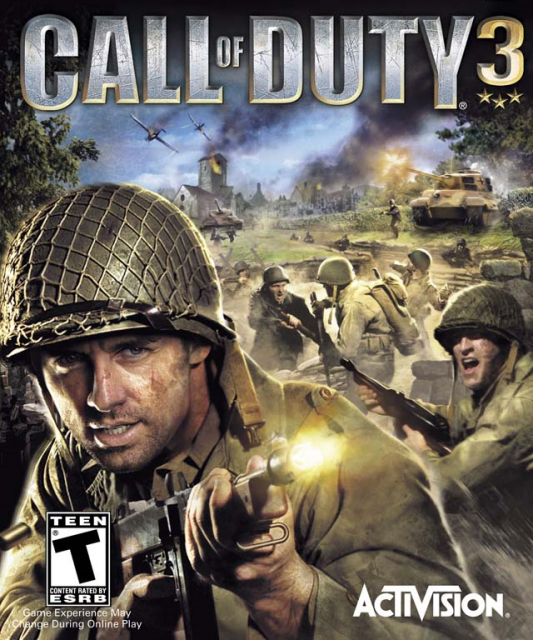