Rocket is a robot. He has a wheel that he rolls around on. So really, the title is misleading if you were hoping for more than one wheel.

Rocket: Robot On Wheels is a 3D platformer in the vein of Donkey Kong 64 and Super Mario 64 for the Nintendo 64, and follows the adventures of a robot named Rocket. The game is notable for its physics engine, and was the first game created by Sucker Punch, the developers of the Sly Cooper trilogy.

Rocket belongs to a man named Dr. Gavin, who despite apparently having a doctorate, has spent his time designing and funding the construction of Whoopie World, a fantastical amusement park.

As Gavin attends a party on the eve of the park's opening, Rocket is instructed to watch after the park's mascots. Hijinks ensue as Jojo the raccoon, one of the park's mascots, kidnaps the park's namesake mascot, Whoopie the walrus. Jojo escapes Rocket with a well placed mallet to the head and teleportsdown to the park, with Whoopie as his captive. Rocket gives chase and spends the rest of the game attempting to rescue Whoopie by collecting tickets and tokens while trying to fix the various machines of the park.

Like any game that stars a robot in an amusement park, you spend a large portion of your time fighting classic enemies such as: out of control robots, evil robotic clowns, and giant robot bees.

At the start of the game, Rocket possesses very little in the way of abilities: only the knowledge of how to jump and how to hold onto objects with a tractor beam. Over the course of the game, Rocket can gain four special moves. Each move can be acquired by collecting a certain number of Tinker Tokens within the various game worlds before seeking out the repair bot Tinker at one of his many repair stations in Whoopie World. These abilities included:

Like many 3D platformers on the Nintendo 64, Rocket: Robot on Wheels was designed to include several different collectibles for the player to pick up along the course of the adventure, most of which were necessary for progressing through the game.

One of Rocket's more unique additions is that of its vehicles. The player can use these contraptions to travel or solve puzzles. Each vehicle requires a certain number of Tinker Tokens to operate, and excluding Whoopie World, each world has at least one vehicle.

Rocket is a smaller platformer than most of those on the Nintendo 64, as evidenced by the 84 tickets to collect and the presence of only seven worlds to traverse, including the overworld. However, most of the worlds shy away from the typical forest, lava and ice worlds typical of most platformers of the day in favor of more novel themes. These worlds also manage to keep true to the theme of the Whoopie World theme park, in that each world is actually just a smaller portion of a Disney World-like-place. Throughout the game Rocket will go behind the basic exterior of each world, showcasing the mechanical gizmos that keep everything together as an attraction. The levels include: 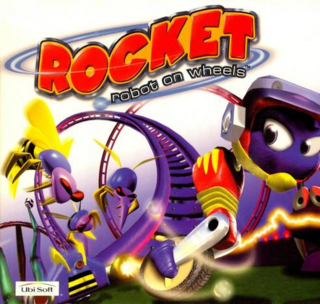