The second expansion to the 1998 first-person shooter Half-Life, showing the events of the Black Mesa invasion in a different perspective: from a rookie security guard.

Half-Life: Blue Shift is a sci-fi horror first-person shooter developed by Gearbox and published by Sierra for the PC on June 12, 2001 as an official expansion pack to Valve's 1998 game Half-Life.

The second of two official expansions to Half-Life (the other being Half-Life: Opposing Force) and originally developed as an exclusive to the unreleased Dreamcast port of that game, Blue Shift takes place during the main story of the original game (where the secretive Black Mesa Research Facility is being invaded by inter-dimensional aliens after an experiment gone wrong) and is played from a different perspective: one of the complex's security guards.

Players assume the role of Barney Calhoun, a rookie Black Mesa security officer (and silent protagonist) who was briefly seen at the beginning of the original game (in a scene that is mirrored in beginning of this game). While performing maintenance on a malfunctioning elevator, the accident occurs and the elevator plummets deep into the complex. After regaining consciousness, Calhoun must fight through numerous aliens and HECU soldiers to find a way out of the complex.

Much of the game is the same as the original, with the exception of a traditional body armor system (as Calhoun does not have access to a HEV Suit used in the main game). Unlike the previous expansion, Blue Shift does not introduce new weaponry or enemies.

Along with the campaign, the retail release includes the previous expansion (with the international release limited to the multiplayer component) and a special High Definition Pack (which revamps most of the original game's models and textures with higher detail). The HD Pack can also be used with both the original game and the previous expansion.

A standalone version of the game was released digitally (via Steam) by Valve on August 5, 2005 (with support for Mac and Linux added later on July 31, 2013).

Barney is a low ranking security guard at Black Mesa during the time of the resonance cascade. The game starts off with Barney riding a tram very similar to the one that Gordon rides in Half-Life. Barney collects his uniform and firearm from the sector 3 security room and goes to work. Throughout the first part of the game the player sees how Black Mesa has been falling apart. Barney is asked to go fix a mechanical problem when he finds himself stuck on an elevator during the beginning of the resonance cascade. Barney fights his way through Black Mesa with his only goal being to find a way out. Barney saves some scientists (among them is Dr. Rosenberg from Half-Life: Decay, and Issac Kleiner) from a group of Marines and they come up with a plan to escape Black Mesa.

The plan is to find an old prototype teleporter and use it to teleport outside of Black Mesa. Barney is briefly sent to Xen to turn on a triangulation device that will allow their teleporter to work. Calhoun defends the scientists from the Marines and aliens as they make their escape. Barney then teleports to the awaiting scientists to escape, but not without a little malfunction that takes him all over Black Mesa.

Throughout Blue Shift, Barney is able to see Gordon Freeman and a few other Half-Life characters. 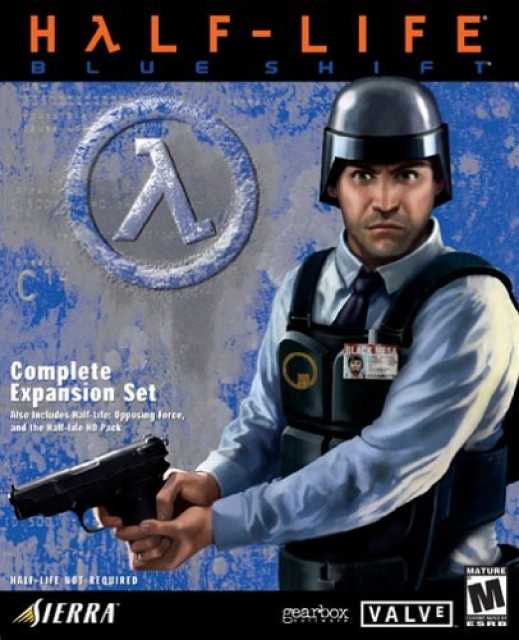