The King of Fighters '96

The third installment in SNK's tag-team fighting game series, further revamping the gameplay while completely redrawing all characters in a newer style.

The King of Fighters '96 is a 2D tag-team fighting game developed and released by SNK for arcades (running Neo Geo MVS hardware) on July 30, 1996. It was subsequently released for the Neo Geo AES and Neo Geo CD later that year.

The second of the three-part "Orochi Saga" arc, the game's story takes place with a new King of Fighters tournament. As it no longer being held by Rugal Bernstein (due to his demise after the last tournament), this tournament becomes an major international event hosted by a mysterious benefactor. This host is later revealed to be Chizuru Kagura, a priestess who hopes to recruit both Kyo Kusanagi and Iori Yagami (as the last of their respective clans) to seal an ancient power (the same power Rugal could not withstand).

The character roster underwent some changes, with 7 new playable fighters and 4 removed fighters. Newcomers include Leona, a frontline soldier of the Ikari Warriors with a mysterious past, and Iori's new teammates Mature and Vice (both of which served as Rugal's secretaries and serve a mysterious purpose).

The game was later ported to the Sega Saturn on December 31, 1996 and to the Sony PlayStation on July 4, 1997, both versions exclusive to Japan. It also received a handheld adaptation for the Game Boy in both Japan (in late 1997 as Nettou The King of Fighters '96) and Europe (in 1998 as The King of Fighters: Heat of Battle). The PS1 version was later digitally re-released (as a PSone Classics title) for the PlayStation 3, PlayStation Vita, and PlayStation Portable exclusively in Japan on May 31, 2007.

The game was also included in the 2006 King of Fighters Collection: The Orochi Saga compilation for the PlayStation 2, Wii, and PlayStation Portable. As the Japanese version of the compilation is the third volume of the NeoGeo Online Collection series, that version features online multiplayer.

The King of Fighters '96 plays like a traditional 2D fighting game, using four buttons (Light Punch, Light Kick, Strong Punch, and Strong Kick). Most of the gameplay remains the same as its predecessor, with some new additions and changes (including updated movelists for all characters).

Main Changes from King of Fighters '95

Each fighter has their own Power Gauge on the bottom of the screen, which is automatically charged by blocking attacks and receiving damage. Players can manually affect both Power Gauges using two special techniques:

Once the Power Gauge is filled, the player enters a "MAX" state (as indicated by the fighter flashing bright) where their basic attacks become stronger for a short time. Fighters in the "MAX" state also have the added ability to perform a dodging roll while blocking. After a short amount of time, the MAX state ends and their Power Gauge is fully depleted.

Players can also perform a hidden character-specific technique (the "Super Special Move") that can only be performed either in the "MAX" state (ending the "MAX" state early) or when the fighter's vitality is low (as shown by a blinking life bar). Performing the technique while both conditions are valid changes it to a flashier, more powerful version of it.

Changes made to the roster include newcomer Leona making her debut in the Ikari Warriors Team (taking over for Heidern) and a new team of crime bosses as the game's penultimate sub-boss (making up of antagonists from both Fatal Fury and Art of Fighting games). The "Rivals Team" was disbanded and Iori Yagami forms a new team of his own (including newcomers Mature and Vice, former secretaries of Rugal Bernstein). Yuri Sakazaki also moves from the Women Fighters Team to the Art of Fighting Team (taking over for her father Takuma), with Kasumi Todoh taking her place in the Women Fighters Team.

Replacing Rugal Bernstein as the main antagonist is Goenitz: a religious missionary and leader of the followers of the divine being Orochi. Replacing Saisyu Kusanagi as the main sub-boss is Chizuru Kagura: a priestess and businesswoman who hosts the tournament under mysterious circumstance.

Unlike other teams, each of the three fighters have their own accompanying theme song during fights on their stage. As each 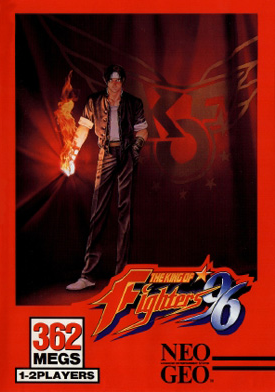