Unrelated to the 2009 sandbox WWII game, Saboteur! was an early example of the stealth genre, two years before Metal Gear.

Saboteur was published in 1985 by Durell Software and released on the Commodore 64, ZX Spectrum and Amstrad CPC.

The game is a 2D adventure game the player takes the role of a ninja who must infiltrate a secure base and steal a floppy disk containing classified information.

The game starts off arriving at the base on a dinghy and then taking the path through various corridors and rooms to find the disk. Once the information is secured, a countdown then starts where the player would then need to escape the building via a helicopter on the roof.

Along the way, the player will come in contact with armed enemies, guard dogs and a number of security measures where the player must navigate around. The ninja can punch, kick and throw various weapons that are lying around at enemies.

The game has elements of stealth and action throughout and is the nearest the early home computers came to having a game like Metal Gear. 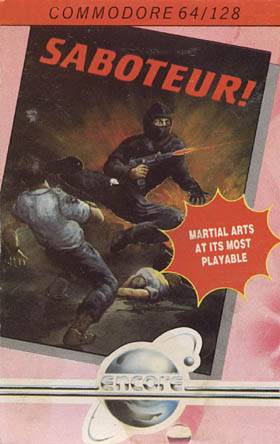