Rendering Ranger is a side-scrolling shooter that was released in Japan in limited quantities. It is the final game to be developed by Rainbow Arts.

Rendering Ranger: R2 is a side-scrolling shooter from the creator of the Turrican series, Manfred Trenz. The game combines side-scrolling shooting akin to Contra III: The Alien Wars and shoot-em-up gameplay more akin to R-Type. Rendering Ranger: R2 was only released in Japan on November 17, 1995. Its limited release (around 5000 copies in total) has resulted in its rarity, with copies of the game ranging in price from around $100 (loose cartridge) to over $1000 (full boxed copy).

Early in development, Rendering Ranger: R2 was planned to solely be a shoot-em-up game titled Targa, but after the popularity of faux-3D games like Donkey Kong Country, the game shifted focus. Rendering Ranger: R2 is well-known for its high graphical detail, including Mode 7, screen-filling bosses, multiple levels of parallax scrolling, transparency, a constant 60 frames per second, and clay faux-3D models. Due to this, the game was fairly well-received by critics and fans.

The game's story, despite being a Japan-only title, is entirely in English. It focuses around a mysterious menace known as the Cube, which threatens peaceful space communities. It's up to the unnamed hero to take down this evil creature.

There are two different types of stages in Rendering Ranger: R2. Of the nine stages, approximately four are run-and-gun akin to Contra, while five are shoot-em-up akin to R-Type. The gameplay remains largely unchanged for these separate types, save for perspective and movement. During shoot-em-up stages, the player is able to move freely throughout the screen (including switching which direction the ship is facing), while run-and-gun keeps players grounded.

At all times, the player is able to freely switch throughout four different weapon types: a spread shot (red), a laser (blue), a bouncing laser (green), and a wave beam (yellow). Each one powers up independently through the corresponding color of power-ups, and each one has a separate special attack or "bomb." The player always has three of these "bombs," but rather than picking another one up after using it, the bombs recharge through normal play.

There are other items that can be picked up as well, including health and extra fighters. The maximum health is five, although health picked up after that initial five adds to the shield (up to three shields). These are represented by floating bursts of light. Extra fighters are only available on the shoot-em-up stages, where two fighters will appear on each side of the player, firing their own lasers.

Rendering Ranger: R2 was notorious for its high level of difficulty in later stages, however there are numerous customization options to compensate for this. Players can select how many lives they start out with (maximum of seven), the difficulty (easy, medium, or hard), remap buttons, and even change the player's color. Level progression can also be saved via an 8 character password presented upon "Game Over". 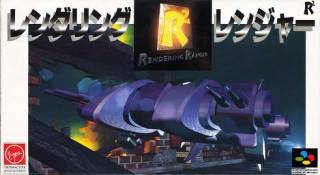