A Famicom turn-based strategy game based on the 1989 sci-fi movie Gunhed. A supercomputer called Kyron-5 threatens the extinction of mankind, forcing a team of commandos to enter its island base to shut it down.

GunHed: Aratanaru Tatakai ("GunHed: The New Battle") is a 1990 strategy game for the Famicom for up to four players. It is the second game based on the 1989 sci-fi movie GunHed, the first being Blazing Lazers for the TurboGrafx-16.

Aratanaru Tatakai is closer to the movie: the players re-activate GUNHED mech units to defeat the supercomputer Kyron-5 and its enforcer Aerobot. Each player chooses where on 8JO, the island base of Kyron-5, to deploy their GUNHED models, and then fights opponents in real-time combat while collecting robot pieces along the way to build stronger robotic armies. The game culminates with a fight against the powerful Aerobot. 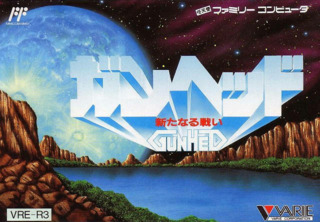