Balloon Fight is an arcade-style platform action game for 1-2 players that is similar to Joust. Players take to the sky and try to pop their foes' balloons before their own get popped.
Game Boy Advance

Gameplay consists of either one player or two-player co-op mode, and the goal of the main game is to defeat all enemies on screen to clear each level. The player is given three lives at the beginning of each game. There is also a Balloon Trip mode that tasks a player's reflexes by presenting an obstacle course full of hazards.

The game was later added to the Wii Virtual Console, the Wii U Virtual Console and the 3DS eShop. It is also present in the first NES Remix from indieszero as one of the featured games.

The player character is a person with two balloons strapped to their back. The player must hit either the A or B buttons to flap the character's hands to fly about the stage, attacking enemies by landing on their backs and popping their balloons. Enemies are defeated by popping both of their balloons, and then landing on them while they are on the ground (in order to prevent them from inflating another balloon). There is also a body of water in the center of each level. If an enemy or player falls into the water or floats too close to the water, a large fish jumps from the water and eats the character. A spinning bumper-blade appears in the later levels as an added obstacle.

The game also features a single-player mode called "Balloon Trip" where the player moves across a side-scrolling level, avoiding lightning bolts and gathering balloons. The player only has one life in this mode, and there is no ground to land on. Players begin the trip at a rank of 50 and as more balloons are gathered, their rank decreases. Nothing special happens if the player stays alive long enough to reach rank 1 (the game simply continues on indefinitely). In the closing part of Iwata Asks about Tekken 3D for 3DS, former Nintendo president Satoru Iwata, who was the programmer of Balloon Fight, stated that they made the Balloon Trip mode in the last 3 days of development.

Balloon Fight was one of the first NES games ever released, several months after the launch of the US version of the console.

The entirety of Balloon Fight was included in the 2002 title Animal Crossing where the game cartridge was featured as a hidden title. Once a player found said cartridge they could play the game any time they wanted to within the game. In 2007, Balloon Fight was released for the Wii Virtual Console. The franchise also saw a spiritual successor in the form of Tingle's Balloon Fight DS, a rare Japanese Club Nintendo exclusive DS cartridge released in 2007. Balloon Fight also serves as the theme to the "touch" mode in Tetris DS.

On January 23 2013, one day after the 28th anniversary of its release on Famicom, Balloon Fight was announced to be the first Virtual Console game released for Wii U. It was released that day worldwide as part of a special promotion celebrating 30 years of Famicom, before even the Virtual Console service proper was released. 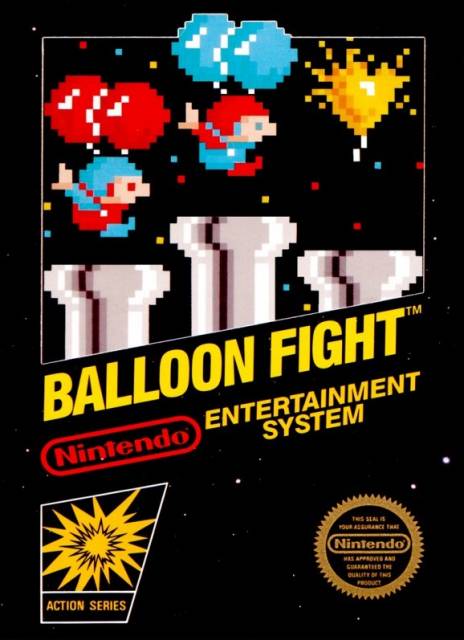