An action platformer and the second game in the Crash Bandicoot franchise. Cortex is back and angrier than ever. Crash must jump, spin and slide his way to defeat Cortex yet again.

Crash Bandicoot 2: Cortex Strikes Back is the sequel to Crash Bandicoot. It features similar gameplay, with improvements such as the ability to double jump, slide, and body slam. The game was also the first to use the warp room section, in which the player was given a choice of five levels to play, in any order they wished, until all were complete. The player then had to face a boss in order to continue. It was released on Halloween 1997.

After the events of the normal ending of Crash Bandicoot, Cortex finds himself in a dark, dusty room. Upon lighting a match, he discovers a Master Crystal, which sets a new evil plot in his mind. Two years after this, Cortex consults his new right hand man, Dr N.Gin on the matter. N.Gin states that the Master Crystal is not nearly enough for their plan, and that they are going to need the twenty five Slave Crystals as well. Cortex acknowledges that there are no friends left on earth to aid them, so an enemy is needed.

On an errand to get some batteries for his sister's laptop, Crash is abducted by Cortex, who tells Crash that he is a changed man in dire need of the bandicoot's assistance. Cortex gets Crash to recover all twenty five Slave Crystals, whilst tricking him that it's for the good of the planet. Crash's sister, Coco, and Cortex's ex-right hand man, N. Brio, realize that Cortex wants the Crystals to power a new Cortex Vortex, to achieve world domination. Coco and N. Brio try to warn Crash, who finds out just in time. With all twenty five Crystals in his possession, Crash confronts and beats Cortex once again. If the player has also obtained all of the Gems in the game, a bonus ending will play, where N. Brio uses the gems' power to destroy the Cortex Vortex for good. We see from the beginning of Crash Bandicoot 3: Warped, that this ending is the canonical one.

While the core gameplay of platforming and smashing boxes remains the same, some drastic changes were brought into Crash 2, and they would become staples for the franchise. The most significant is the warp room system, which eradicated the map screen from the first game. When Crash is abducted, he is thrust into a warp room, in which the player can choose to play 5 levels in any order. If the player collects the crystal from each one, they are able to proceed to the next warp room after a boss fight. Some old faces return, such as Ripper Roo, and some new ones are added, such as Komodo Joe and Moe, as well as Tiny the tiger. After the game is completed, the player can revisit the levels and attempt to obtain all gems and gain the elusive 100%.

In each level, there is a bonus round. Crash does not lose lives when doing these and, unlike the first game, can repeat them as many times as the player wishes, as long as they do not finish them. Most bonus rounds involve the player having to think about how they will get all the boxes for the gem.

As well as the returning items such as Wumpa Fruit and Aku Aku, Crash Bandicoot 2 added a couple of extras to enhance gameplay. These are:

Like the TNT crate; however, this item would explode on impact, even if it were only touched by Crash. A green exclamation mark box will explode all nitro crates in the level, so getting the level's gem was still possible.

In the original Crash Bandicoot, the way the player would progress through the levels would be completely linear. In Crash Bandicoot 2, however, Crash was given five levels at a time to tackle, in what ever order the player wished. To signify that a level was complete, the player would bring a crystal back from it, which was always placed rather blatantly in the level. If the player dodged the crystal, but made it through the level, then the level was still regarded as incomplete. Crystals are given context in the plot as the reason why Crash is on his adventure this time round.

Using the Warp room system meant that the general amount of areas in the game rose from the original, There were now five Warp Rooms that Crash had to make his way through in order to complete the game, each containing five levels. These levels were still based around the three islands of the first game but environmental changes had altered the landscape drastically and the player never knew where they where on each island in a level. Naughty Dog released a map like poster to clarify general level whereabouts, pictured right.

Set on the first of the three islands, this warp room sets up the basic play of the game easing the player into the gameplay.

Ripper Roo is the one returning boss from the first game excluding Dr. Cortex himself. We find Ripper Roo supposedly in the same spot he was in the original, however he has turned his waterfall den into a library. Roo also appears differently in this game, wearing a top hat and a bow tie, this earned him his other name Dr. Roo. Crash must fight Ripper Roo on a grid where the squares get filled with TNT depending on where Roo bounces, the explosion will eventually catch up with Roo and hit him causing him to set Nitro squares that crash can't step on. If Crash can dodge both TNT and Nitro explosions he has a chance to hit Roo. This game further reinforces the idea that Ripper Roo isn't working for Cortex as at this point Cortex is not wanting him to hand over the crystals to a minion, he even warns Crash of 'enemies' before proceeding. This means that Ripper Roo was either working for the side of good, or he was just tinkering with the warp room system.

Set on the Second Island which has frozen over since the first game.

The Komodo Brothers are two Komodo dragons called Moe and Joe who face crash after he has obtained ten crystals, their motives are fairly unknown. The boss fight includes Crash having to dodge Komodo Joe's spinning attack until he gets dizzy, after this Crash can spin him into Komodo Moe and damage both of them. Komodo Moe will also throw knives at Crash.

This warp room is located in the lower half of the third island, where the Cortex Power plant on once was, Crash is paddling in water amongst the pipes here.

When leaving the third warp room Cortex tells Crash to give his Crystals to Tiny the Tiger for safe keeping. By this time crash has had time to think about what Cortex's real motives are and refuses to give Tiny the crystals. Tiny is another one of Cortex's mutant army and is incredibly loyal to his master, he is also portrayed as being all brawn and no brain. The boss fight happens in Cortex's Space Station on platforms above an enormous drop. The aim of the boss fight is to avoid Tiny Tiger and wait until some platforms warn that they are going to fall, Crash must lure Tiny into falling by guiding him toward falling platforms whilst minding not to fall himself.

This warp room is further up the third island in an abandoned mine.

Cortex demands that Crash gives his Crystals to his new right hand man, Dr. N. Gin, Crash refuses and so a boss fight ensues. N. Gin is an engineer, which means Crash's battle is against him in his flying mech aboard Cortex's Space Ship. This time Crash is loaded with Wumpa Fruit that he must throw at N.Gin's mech when it displays its green weak point after firing. By doing this N.Gins ship gets destroyed part by part and eventually he goes flying into space.

This warp room is inside the space station itself.

In this final confrontation Crash have equipped his jetpack and are chasing Cortex through a space tunnel. The aim is to avoid all obstacles coming at Crash to catch up with Cortex and spin him. If he doesn't get all of Cortex's health down before he reaches the warp gate the player will instantly lose the battle. If Crash wins he'll send Cortex flying into space triggering one of the two endings depending on the player's progress.

As well as the standard Gems for boxes this game also featured colored gems. To obtain a colored Gem Crash would have to do something special in the level for example go through the level without breaking a single crate. These Gems opened up special paths to secret levels.

If the player obtained all of the gems and all of the crystals they would unlock the full 100% ending to the game. This involved Crash N.Brio and Coco firing a laser powered by the Gems into the Cortex Vortex destroying it for good, this ending is the Canonical ending of Crash Bandicoot 2.

There are two secret levels in the game, found in a secret Warp room known as Totally Bear and Totally Fly in the lost city of the second island. This can be accessed through the levels, Bear Down and Air Crash.

If Crash goes to the Polar bear cub in warp room 2 and jumps on him repeatedly, he will eventually obtain extra lives.

To replay an already defeated boss the player will need to go to the the Warp Room before the Boss fight they intend to replay, go on to the elevator platform and while moving up the platform hold down the Triangle button and Crash will be warped to the Boss fight. 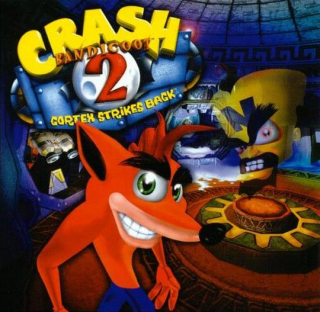