Condemned is a first person horror game in which you play as detective Ethan Thomas who is on the hunt to find a mysterious serial killer amidst a rising tide of insanity and violence in Metro City.
Xbox 360

Condemned: Criminal Origins is a First Person Melee based Horror game in which players take upon the role of Ethan Thomas on his search for a man by the name of Serial Killer X. The game was a launch title for the Xbox 360 and was developed by Monolith Productions, Inc. and published by Sega.

The game begins with SCU agent Ethan Thomas arriving at the scene of a murder by the infamous criminal, The Match Maker. Soon after arriving, Ethan discovers that the actual murderer is not the Match Maker, but a mysterious Serial Killer X, a man who is hell-bent on killing the serial killers that Ethan has investigated throughout his career. After Ethan accidentally drops his weapon, Serial Killer X kills the two cops who were accompanying Ethan and disappears. Ethan then gets blamed for the murders of the two cops and has to find where Serial Killer X has gone in order to prove his innocence.

During his investigation, he comes across Malcolm Vanhorn, a friend of Ethan’s father. Malcolm guides Ethan along, seeming to know more than he is letting on. During his investigation he also gets help from Rosa, a Lieutenant who was going to help with the killings of the Match Maker. She helps with Ethan's investigations into Serial Killer X, often providing information about where he might be based on clues that Ethan finds. Ethan also meets up with Rose, who provides him with an upgraded Taser.

During the game, there is a common theme that runs along side the main story line, explained during the loading screens, often with text. These boxes of text describe that the homeless people who live in the worst parts of the city have suddenly started committing unexplained acts of violence against any and all who cross their path, including you. The text also explain that birds have also been affected, dying in large quantities due to unexplained brain tumors. These event are implied that they are not only related to each other, but to Serial Killer X.

Condemned: Criminal Origins primarily focuses on its melee and crime solving concepts, rarely allowing the player to get a hold of firearms. The weapons are mainly of the melee type such as pipes, sledgehammers, fire axes, 2x4's, etc. The investigation aspect of the game has players searching for fingerprints and examining bodies for signs of the cause of death. The forensic tools that players use in these situations are also automatically equipped when required. The game was a launch title for the 360 and even now is still held in high regard for its atmosphere.

The Taser that Ethan can use will stun enemies for a short period of time, allowing him to either get in a free hit, escape, or steal the victim's weapon right out of their hand. The upgraded Taser that Ethan eventually acquires will not only stun enemies but will also drop them to the ground. The majority of the game is set in areas with dim lighting or no lighting at all. As such, the player will almost always need to have Ethan's flashlight on in order to see.

Condemned: Criminal Origins features unique artificial intelligence that makes enemy encounters unpredictable. When an enemy needs a weapon, they'll look around frantically and can rip pipes off of walls or pick anything up off the ground. They may run away and disappear into the darkness at random and then ambush the player as they round a corner. When an enemy has received a strong beating, they may fall to their knees. At this point, the player can perform one of four possible finishing moves: Ram, Slam, Snap, or Punch.

Melee weapons are more common than firearms in Condemned. Melee weapons differ in appearance and stats that include damage, range, speed, and blocking efficiency. Generally, the smaller the melee weapon, the less damage it does but the faster it swings. Some of the melee weapons are required to gain entry to different areas in the game. The Fire Axe is used to chop down wooden doors, the shovel is used to cut electrical wires keeping a door locked, a sledgehammer is used to break traditional locks, and a crowbar is used to pry open doors and safes.

Firearms are very uncommon in Condemned. In most situations, the weapon won't even have a full magazine. Players cannot pick up ammo anywhere; they are restricted to whatever is there when they pick it up. Additionally, firearms can be used as melee weapons before and after they run out of ammo.

Ethan Thomas was voiced by Greg Grunburg. Grunburg is probably most famous for his role as Detective Matt Parkman on the TV show 'Heroes'. Interestingly, Thomas and Parkman share many similarities, both being detectives with supernatural powers that are psychic in nature.

Many players have reported difficulties in unlocking the 'Melee Mayhem Award' Achievement. Players are required to wield every weapon in the game, however sometimes the pick-ups do not register. Swinging or killing with each weapon have been suggested to ensure they are counted. Given the achievement requires a complete play-through, this bug can be particularly troubling.

Condemned: Criminal Origins requires 5.4GB of space to install on an Xbox 360 HDD. 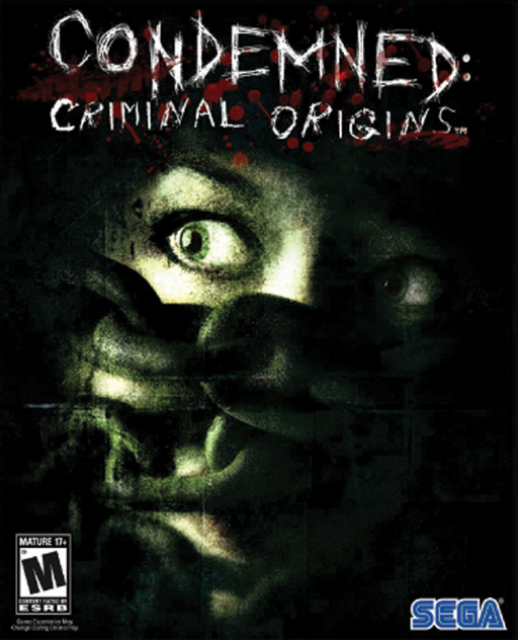