Much like Super Mario 64, the game opens with Peach inviting Mario to her castle. Mario shows up, but he is not alone, Wario and Luigi accompany him. All three enter the castle and disappear, along with the still kidnapped, Princess Peach. Instead of beginning the adventure as Mario, Yoshi is the first playable character, who has woken up from his deep slumber. There is also a small event before the player can enter the castle in which they have to capture a rabbit with a key to the front door. Yoshi sets off into the castle in search of his friends, and the player will soon be able to play as all four characters. Much of the rest of the main game is almost exactly like its predecessor, jumping into paintings, finding stars and defeating Bowser.

The control scheme was a big issue as it used to be played using an analog stick on the N64, which does not exist on the DS. Nintendo came up with a solution of using the touch screen as an analog stick. The controls can be changed to suit both right- and left-handed play styles. During gameplay, pressing Select will immediately bring up the "Control Modes" screen which provide the three following options.

This mode allows for the use of a stylus for analog control. A bigger circle will appear on the touch screen which indicates the player's speed. It functions similarly to how the circle behaves in Touch Mode, however the player can also use the D-pad for functions similar to the face buttons. This is suited for those who use the Nintendo DS on a flat system.

Throughout the castle grounds the player will often notice small bunnies hopping around wildly. Though they may seem just for decoration, they're actually a small challenge. Each rabbit caught unlocks a new mini-game in Princess Peach's Rec Room. Each of the four characters has seven rabbits to catch—below is a list of their locations. The easiest way to catch the rabbits is to chase them into a corner and dive at them. They always run in a pattern, giving the player a chance to predict where they go next.

The player begins the game as Yoshi, and until they collect eight stars total he's the only character available. Yoshi has a few unique abilities, including his "floaty" jump. By jumping and hold down the jump button in mid-air, Yoshi's legs will flutter underneath him, letting him float a little further than normal. Also, Yoshi can fire eggs as projectiles. To lay an egg Yoshi will have to first grab an enemy with his tongue and then press the crouch button. These eggs will ricochet off of multiple enemies if lined up right.

The unique ability that lets Yoshi solve puzzles others can't is his ability to breathe fire. Breaking open a red "?" block and grabbing the power flower lets Yoshi breathe fire for a short period of time. His fire breath can be used to melt ice blocks, or to damage enemies.

He's also the only character that does not fight with his fists, therefore he is unable to fight ghosts, which also means the player cannot enter Big Boo's Haunt as Yoshi.

He's available at the very start of the game.

Mario is probably the most versatile character in the game, though Luigi runs a close second. Mario is very maneuverable and quick, and his most unique ability is his wall kick. Only Mario can jump off of walls to gain extra height, which will let the player reach certain areas that other characters can't (or just take shortcuts that are beyond the reach of others).

When Mario grabs a power flower he'll inflate and float around. The player can change Mario's altitude by rapidly tapping the jump button, letting Mario reach vertical platforms that are out of reach to others. Also, some red "?" boxes will give Mario a feather instead of a power flower. With this feather, Mario can glide through the air to reach new areas. Mario can start flying either by shooting out of a cannon or by performing a triple jump.

The player first need eight power stars before they can unlock Mario. When they have the first eight, defeating the Goomboss will unlock Mario.

Luigi's greatest strength is in his jumps. Like Yoshi, Luigi can sort of hover in mid-air for a second by holding the jump button. More importantly, Luigi has a very unique back flip technique. Luigi's back flip goes higher than anyone else's, and as Luigi falls from his back flip he slowly twirls down to the ground. The player can use this back flip to reach high places, or to glide across large gaps that other characters can't jump across. To perform a back flip, just jump while crouching.

Have Luigi grab a power flower and he'll turn invisible. While invisible, Luigi has the special ability to pass through certain objects, including certain paintings, mirrors, and especially cages. Since the invisibility only lasts a short time, Luigi'll have to be quick to get to the goal once he grabs the power flower.

Once the first eight power stars have been collected the player can then access the Big Boo's Haunt course in the basement. After earning the first star in the course, a set of steps will appear in the main house that lead to the second level. Through the door to the east (upstairs) is a secret loft with a painting of Luigi. Complete the Big Boo Challenge to unlock Luigi.

Wario is easily the most difficult character to play as. He's slower than everyone else, has shorter jumps, and is generally less agile. However, what he lacks in maneuverability he more than makes up for in raw power. Wario's strength is unique, and he's the only character in the game that is capable of busting open the black-brick blocks that are located in some of the courses.

Wario's special power flower ability will turn him into a giant hunk of metal. When Wario is in metal form he's nearly immovable—strong winds won't be able to push him from cliffs, and even powerful water currents can't budge him. The player can use this unique ability to get Wario into places that other characters just can't reach.

How to Unlock: The player won't be able to unlock Wario until after they've collected thirty power stars. When the second floor of the castle is unlocked, the player must head up there with Luigi. Grab the power flower in a nearby room and jump through the mirror to hop into the painting of Wario and complete the Chief Chilly Challenge.

In addition to the main game, Super Mario 64 DS also has a mini-game mode that utilizes much of the touch screen controls. Divided into four sections representing the four characters, each section hosts a different variety of mini-games. Yoshi's mini-games include Wanted, a game where the player has to find a character in a sea of impostors, and a Luigi's Mansion mini-game with the objective of using the stylus as a flashlight to detect a Boo, among others. Mario's mini-games include a couple platforming-jumping games with the objective to squash the Shy Guys and prevent Mario from falling, a couple of puzzle mini-games where the player has to draw the path of a falling Mario head to keep it away from the piranha plants, and a turtle shell-bowling game with the objective to get as many points as possible. Luigi's mini-game section includes many casino-style gambling games like roulette and memory. Wario's mini-games include a missile-command style bob-omb game, and a snow-ball game. Several of these games and more are unlockable as the player progresses through the game. Several of these mini-games were included as extras in New Super Mario Bros when it was released two years later.

The last additional feature Super Mario 64 DS has is a versus mode. In this mode, the player can compete against their friends in levels such as Princess's Secret Slide, Castle Grounds, Sunshine Isles and Battle Fort. The main objective is to collect as many stars as possible. 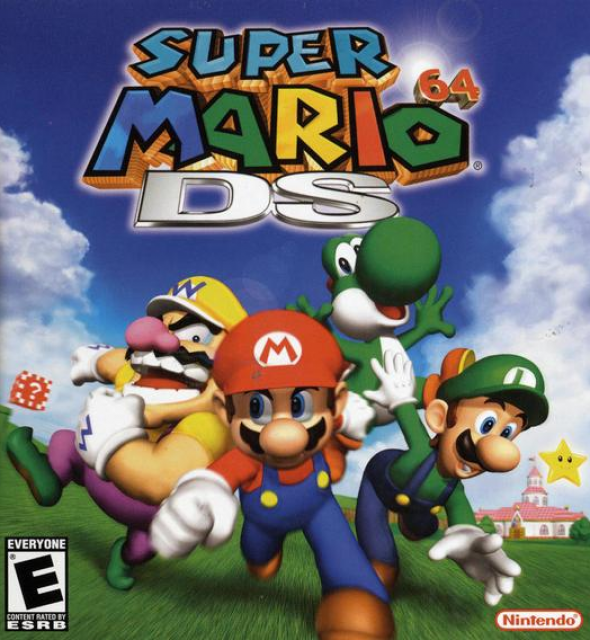