The first game in the Action RPG series. A human starship crashes into an alien planet and works with the natives to cure a deadly extra-terrestrial disease.

Star Ocean is an action RPG for the Super Famicom and was the first game developed by tri-Ace. The game was published by Enix on July 19, 1996 and was never released outside of Japan. A enhanced remake named Star Ocean: First Departure was released for the PSP in 2007.

Star Ocean was created by the team behind Tales of Phantasia by Namco and features many similarities to it. The team left Namco due to "creative differences," such as the alteration of the character names, story, sprites, and even the title of the game itself (the original being Tale Phantasia, named after the novel by Yoshiharu Gotanda, the game's main programmer).

An unofficial English patch was created by DeJap Translations for Star Ocean and was released on December 31, 2003.

Star Ocean begins in Clatos, a town on the undeveloped planet of Roak, and follows a young Fellpool named Ratix Farrence. He is a swordsman in the Clatos Brigade, as is his companion Dorn Marto, who's duty is to defend the town against thieves and robbers. One day, a petrifying disease spreads in the northern town of Cool, turning its inhabitants to stone. The town healer, who is the father of Ratix's best friend, Milly Kiliet, travels to Cool and tries to use his Crest Magic (also known as Heraldry and Symbology in later games) to cure the disease. Hr is unable to, and is eventually turned to stone himself. When this news returns to the village of Clatos, Ratix, Dorn, and Milly set off to collect Metox, a herb said to cure any ailment, from Mt. Metox.

When they reach the top, where the plant is said to grow, they are met by a mysterious light, from which two oddly dressed people emerge from. One is a male named Ronixis J. Kenny, and the other a blonde female named Iria Silvestoli. Ronixis introduces himself as a captain of the Earth Federation starship Calnus. He tells them that the disease that is turning their people to stone was caused by the Resonia, a race the Federation is at war with. He doesn't know why they are targeting their planet though.

It turns out that the Resonia are using Roakian blood to block out the part of the spectrum that is visible to the human eye. While this would give them a massive advantage in the war against the Federation, they use it to sneak into Federation HQ and explain that they do not wish to fight, but are being forced by the Fargett, a race that hates the Federation.

The group also discovers that the petrifying disease is caused by a monster known as Asmodeus, who originates on the planet Roak. Ronixis decides to travel to Planet Stream (later called Planet Styx), and use the Time Gate located there to travel back in time and gain a sample of Asmodeus' blood. After gaining the sample, they head back to their own time, but get separated from each other, Ronixis and Milly on one continent, while Ratix and Iria are on another. 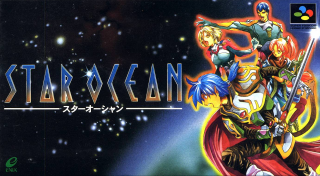