One of the most technically advanced games to be released on the SNES; this shooter featured liberal use of voice samples, Mode 7 and even Dolby Surround.

Super Turrican 2 is a side-scrolling shooter game for the SNES and part of the Turrican series of games, which features sci-fi heroes equipped with the titular "Turrican" cybernetic combat suit as they move around large environments filled with enemies. The game is also a direct sequel to 1993's Super Turrican. Like other games in the series, it features a lot of side-scrolling "run-and-gun" shooter action, though Super Turrican 2 also features vehicle levels. The Turrican suit is equipped with a grappling arm for the first time, which expands the protagonist's traversal capabilities.

The game makes ample use of the Super Nintendo's technology, including copious amounts of Mode 7, and is one of a handful of SNES games to take advantage of Dolby Surround Sound. It premiered in its native Europe first before being released in North America later the same year.

Super Turrican 2 was published on the Wii's Virtual Console in North America in 2008, but has since been removed from the service. 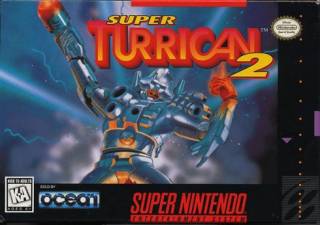