Don Doko Don is a Japanese action platformer first developed and published for arcades by Taito in 1989. One or two players control bearded dwarves as they make their way through fifty platforming and puzzle-like levels in an attempt to save their kidnapped girlfriend.

Gameplay typically consists of basic platforming with puzzle elements, usually stemming from proper use of power-ups and special abilities than can even lead to secret areas. The game consists of five worlds, with ten single-screen levels in each plus a boss at the end. Throughout the levels there are also various enemies which can be dealt with by smashing them with the dwarves' hammer. Enemies squished by the hammer can then be picked up and used as deadly projectiles to take out other foes. Once all enemies have been cleared, the player can then move onto the next level.

Power-up items can often appear in the center of stages and give a boost to the player in the form of extra power, speed, weapons, instant death of enemies and a slow-down ability. The amount of power the player has determines how far and powerful they can throw enemies through walls.

After the success of the Arcade release in 1989, the game was eventually ported over to the Nintendo Entertainment System and TurboGrafx-16 a year later and retained its core gameplay with some minor loss of graphical fidelity.

In 1992, Don Doko Don 2 was released on the Nintendo Entertainment system by Taito in Japan. Unlike the first game, the sequel took the form of a side-scrolling platformer.

In 2006, the game was included in the PC, Xbox and PlayStation 2 compilation Taito Legends 2, making it available to audiences outside of Japan for the first time since its release. 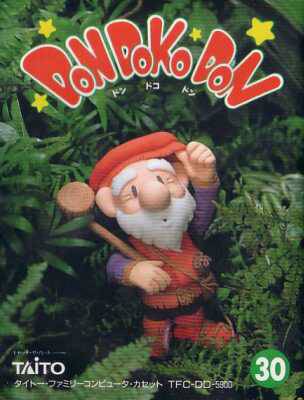