A sci-fi side-scrolling shooter for the SNES, which is an updated version of the Amiga/Atari ST game Turrican. It is one of few SNES games to feature Dolby Surround.

Super Turrican is an updated version of the popular Amiga side-scrolling shooter Turrican for the SNES from Factor 5. It takes the stages and bosses from the first Turrican game and graphically tweaks them for the more powerful Super Nintendo system. It's very similar to Mega Turrican, which was released on the Sega Genesis and was also a version of the original game that received a graphical boost. Super Turrican does have a few new stages and weapons to set it apart, however.

This game is not to be confused with the other Super Turrican, available for the NES and comprised of stages from the first two Turrican games merged together. 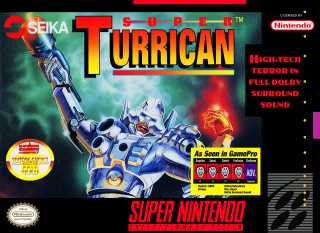