The SNES version of the classic Genesis shoot 'em up Thunder Force III.

When compared with the Genesis title, gameplay-wise they were nearly identical, with the only real differences being the Heads Up Display being moved from the top to the bottom of the screen, minor alterations to some of the levels, and the removal of the ability to choose the order in which the player completed the levels. However, it suffered from the notorious "slowdown" that plagued many early Super Nintendo titles when too much activity on the screen at once would overtax the system. A loss in music and sound effects quality was present as well. 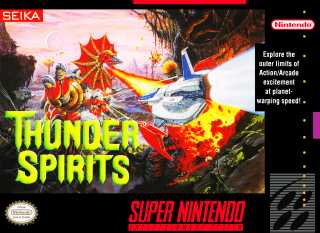