Beyond the Beyond is a traditional role-playing game developed by Camelot for Sony's PlayStation. While it initially met with poor reviews and low sales, the game has gained a small cult following over the years.

Beyond the Beyond was released on August 31, 1996 for the PlayStation by Sony Computer Entertainment America and Camelot Software Planning, the developer later responsible for the acclaimed Golden Sun games on the Game Boy Advance. Many aspects of Beyond the Beyond later found their way into Golden Sun, such as three characters parties and active time battle. While the game did receive poor reception, it has garnered a small cult following.

Beyond the Beyond is the story of a young apprentice knight, Finn, who is caught up in an ancient war between the Beings of Light and the Warlocks of the Underworld. With the peace of the island he calls home in jeopardy, he embarks on a quest to end this battle once and for all. Finn and a number of other adventurers are tasked with defeating enemies from the underworld to protect the fate of the kingdom of Marion.

The game is split between two sections; the overworld and the battle scenes. The overworld consists of traditional role-playing game mechanics, whereas the player explores a two-dimensional world in a top-down perspective. Here, the player explores towns and villages, talks to non-playable characters, continues the storyline, completes side-quests, and triggers random encounters. Additionally, there are three secret characters which can be unlocked, although the game was almost universally panned for a general lack in length and depth beyond these features.

The battle system differs from other role-playing games of the time, and has many similarities to Camelot's later Game Boy Advance title Golden Sun. When a battle is triggered, the view switches to beyond-the-back. Despite this, the change is not only cosmetic. Titled the "Active Playing System" players interact with the battle by pressing certain buttons at the correct moment to greatly increase the chances of landing a more powerful attack.

While most role-playing games use a Hit Point (HP) system to determine if a character is alive or dead/unconscious, Beyond the Beyond essentially divides this stat into Vitality Points (VP) and Life Points (LP). A character has more VP than LP and when a character's VP reaches zero and they still have LP, the character will become 'groggy' for the remainder of the round and unable to act. However, at the start of the next round a portion of LP will be consumed to recover a small amount of VP and allow the character to take actions again. If a character reaches zero VP and does not have any LP remaining, the character will die and must be revived. It is also important to note that healing items and spells only affect VP.

Upon defeating all enemies in a battle, players are granted with experience points and money. The money serves its purpose for buying items in the overworld, although the leveling system is different than other role playing games. After reaching level twenty, that character can be promoted. This causes the character's level to be reset to one, although they gain the ability to use better armor and weapons. Another portion that the game was criticized for was the fact that once the player died, they were sent back to their last save point with only Finn alive, and half of the money gone.

Despite being the most well-received portion of the game, Beyond the Beyond's soundtrack still did receive some criticism for the fact that it relied on MIDI format songs rather than pre-recorded red book audio. The game's soundtrack was composed by Motoi Sakuraba, and five tracks were later released by Antinos Records on May 2, 1996. This version was a heavily arranged version of the soundtrack, with five long tracks, despite being advertised as an original game soundtrack. This soundtrack has received moderate acclaim, despite its rarity (copies of the soundtrack go for over $100 USD). 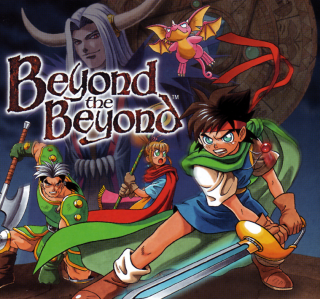