Medal of Honor Heroes 2, released in November 2007 in USA, was one of the few Wii titles to have online and the first to have 32 players online. The online play was discontinued in August 2011; even for the PSP version.
PlayStation Portable

The story is about OSS operative Lieutenant John Berg going behind enemy lines to try to bring down the Nazi regime in the year 1944. The campaign features seven story missions, from the storming of Normandy Beach on D-Day to taking out an enemy base in Germany.

The game has exactly seven missions. Despite there being only seven, they are longer than the missions in the previous game. In fact, there are loading screens between phases of a mission (PSP version), as well as checkpoints the player can restart from if they are incapacitated.

Replay value comes in the form of 3 difficulty levels (Green, Veteran, and Hero) and bonus objectives. When finishing a mission, the bonus objectives the player failed to find are listed, encouraging you to play the mission again and find them.

Medal of Honor: Heroes 2 had a 32 player online mode. You can pick from three different models on both the Allies and the Axis which for the Allies are the 2nd Ranger, 3rd Ranger and 5th Ranger and for the Axis is the Axis Rookie, Axis Regular and Axis Elite. Both the PSP and Wii version of the game have near identical multiplayer expect on the Wii version there is Zapper support and on the PSP you can play up to 8 players on Ad-Hoc. On the Wii the game does not use the Wi-Fi Connection used by other Wii games instead to play online, players must sign into to EA Nation, EA's online service.

Strangely, there is no Skirmish mode even though the first Medal of Honor: Heroes has one.

There are 3 Multiplayer modes:

This is a standard Deathmatch mode. All players play without teams. The player with the most points at the end of the time limit wins. This mode can be played on all 6 maps.

This is the same as Deathmatch except players play with two teams, the Allies and the Axis. The team with the most points at the end of the time limit wins. This mode can be played on all 6 maps.

Two teams fight against each other to get the other teams flag and return it to their flag. The team who score the number of flags needed to win a game (depending on server) win the game. This mode can only be played on Village and the Sewer maps.

The game features six different maps. Each of these maps are a section of one of the missions in the campaign, but may have unique areas exclusive to the multiplayer versions, such as the Base map having new caves and tunnels. Furthermore, many of the doors that were sealed off in the campaign are now open, allowing for more ways to travel between areas.

(*)- Maps are usable in Capture the Flag mode.

In the Australian version of Medal of Honor Heroes 2, there is no multiplayer support much to the dismay of Australian fans who were looking forward to the game's multiplayer feature. EA's official response to this was, "Medal of Honor Heroes 2 for Wii does not support online functionality in Australia. We made an error in the documentation and marketing materials. We are very sorry to have caused confusion for our customers. We will provide a refund to anyone in Australia who wishes to return the game to EA because of the lack of online functionality." Australian EB and GameStop have gotten rid of any notice of multiplayer support for the game from their website. Speculation as to why the game shipped with no multiplayer is that EA would not turn a profit hosting the local servers.

Medal of Honor: Heroes 2 has generally received mixed or average reviews. On GameRankings, the Wii version scores a 74.71 while the PSP version scores a 69.55. Overall the game was well received for its controls, fast gameplay and impressive online. The game was criticized for its awful AI and generic story. 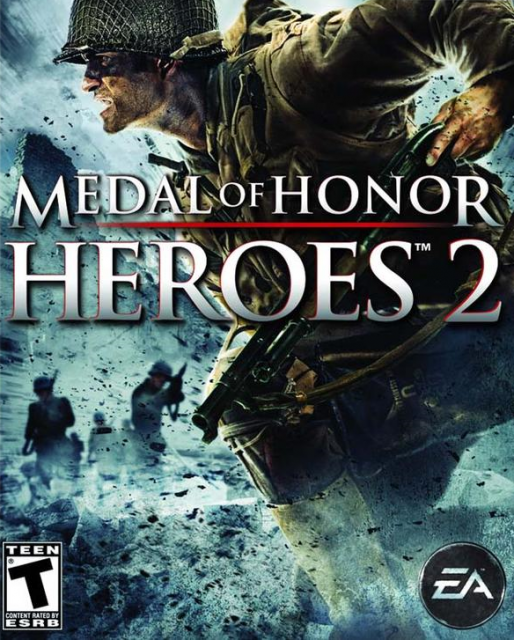