Gradius V is a traditional 2D side-scrolling space shooter. The power up system is classic Gradius; players pick a weapon set from a selection of four 'types' and activate power ups - dropped from enemy ships - from a linear bar at the bottom of the screen. After completing the game once, a Weapon Edit type is selectable which lets you mix and match your weapon sets. New are the optional "multiples" controls; each 'type' has its own special option method with advantages and disadvantages over others.

The game spans eight levels over seven environments; the second and eight levels are identical. Every level ends with a boss battle, each featuring a weak spot (usually in the form of a blue core.) Two "boss-rush" sections return from Gradius III, including several bosses from that game.

Any completed section of the game can be replayed directly at any point. Completing a playthrough of the game activates a "loop," recycling the eight levels, but steadily increasing the difficulty with each pass up to 255 times, also known as the "high loop."

The size of the hitbox has been more conformed to the ship's shape than in previous Gradius games. The tiny black cockpit window of the Vic Viper is the only part that will take damage from projectiles, and knowledge of this fact is crucial to surviving some of the game's levels, which feature flying through very narrow passageways and navigating through asteroid swarms, a nearly impossible task had the entire ship been vulnerable.

Revival Start allows players to resume play immediately from the point where they crashed, rather than from a fixed checkpoint. This greatly alleviates much of the difficulty of the game.

Additionally, unlike previous entries (which did not implement revival start), multiples in Gradius V are not immediately lost after death, and subsequently can be retrieved by either player. It is possible, through an exploit in Stage 7, to possess more than four on screen multiples, should one player die during an auto-scrolling segment, lose their multiples, rebuild new ones, and retrieve the original group once the screen resumed speed.

Gradius V is the second game in the series to feature simultaneous multiplayer, which debuted in Gradius Gaiden. At any point, a second player can enter the game as a red "Vic Viper." High scores are individually tracked, and lives held independently, but continue credits are shared. Additionally, the number of on screen multiples does not increase from four, unless exploited (see above.) The overall difficulty is not increased by adding a second player, and revival start is automatically implemented.

A separate game mode tracks player scoring under standard guidelines: players are afforded three lives, no continues, and must start at the beginning of a "Normal" difficulty-set game. At the cessation of each game, a unique, complex code was gererated to be entered online on Gradius V's website. Konami ran an online tournament in 2005, rewarding the top player a medal model of the Vic Viper, as well as a "behind-the-scenes" DVD detailing the game's development.

The soundtrack for Gradius V was composed by freelance composer Hitoshi Sakimoto and released under the title "Gradius V Soundtracks" in Japan on August 18th, 2004. 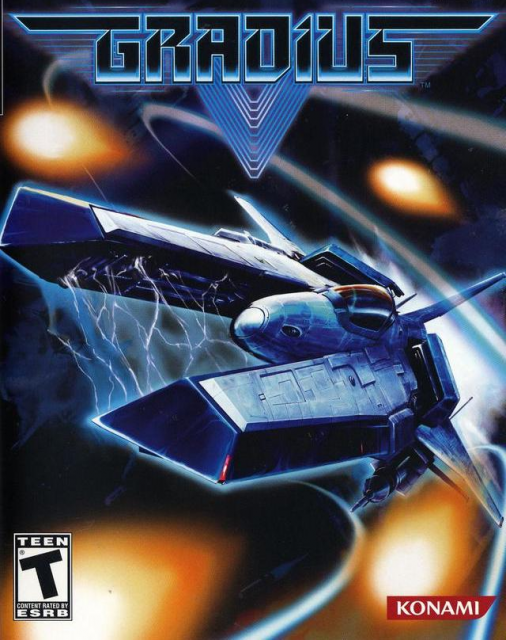