War Gods is a 3D fighting game developed and released by Midway for arcades in late 1995. It was later ported by Eurocom and published by Midway (GT Interactive for the PC version) for the PlayStation, Nintendo 64, and PC throughout 1997.

Similar in gameplay to their Mortal Kombat series, War Gods is Midway's first 3D fighting game (running on the same hardware as their first 3D game: Cruis'n USA) and is one of the first games to digitize photographs of real actors onto 3D models.

The premise of the game involves an ancient alien starship that crashed onto Earth while transporting a special life-giving mineral (known as The Ore). Throughout time, nine humans (and a stone idol) were transformed by the power of the Ore into immortals and are each fighting to possess the remaining Ore.

Along with heavy use of chain combos, the game also has a lot of useful universal tech from the Mortal Kombat series, including uppercuts (down + High Punch), leg sweeps (back + Low Kick), and roundhouse kicks (back + High Kick). Other technical abilities include running forward (pressing Forward twice), throwing (forward + Low Punch), shoving blocked opponents (pressing Block twice), and attacking downed opponents (up + High Punch). While recovering from being knocked to the ground, players can dodge (back + Block) or make a quick attack (forward + both Punch buttons).

Also like Mortal Kombat, each character has their own unique finishing move (Fatality) that can be used at the end of the match to cinematically execute the opponent.

War Gods includes ten playable characters and two bosses playable with cheat codes. The likenesses of most characters are based on real actors, with some actors previously playing the digitized characters in Mortal Kombat (notably Vallah as the actress of Sonya Blade and Warhead as the actor of Shao Kahn). 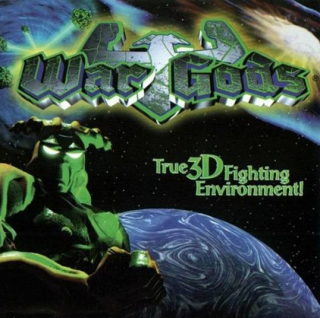