A bowling simulator for the Famicom. It allowed for up to five players and was the first bowling game for the system.

Dynamite Bowl, despite what the box art would suggest otherwise, is a fairly straightforward bowling simulator for the Famicom as well as a few other Japanese home computers. Up to five players can play at once taking consecutive turns, choosing the weight of the ball and the lane to roll down (though all lanes are functionally identical).

Like in every iteration of ten-pin bowling, the goal is to knock down as many of the pins as possible. Hitting all ten with one roll results in a "strike", while hitting all ten in two rolls results in a "spare". Players compete for the highest score after ten frames. To do this, the player must select the speed and direction of each bowl by hitting the button to stop a fast-moving meter at the desired point. 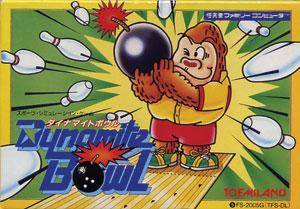