The third game in the Metal Slug series, first released to arcades in 2000 and later ported to many home consoles, PCs, and mobile devices.

Metal Slug 3 is a 2D side-scrolling shooter that was originally released for Neo Geo MVS arcade units, but has been ported to the Neo Geo AES home console, PlayStation 2, PlayStation 3, PlayStation 4, PlayStation Vita, Xbox, Xbox 360 Games Store, iPhone, iPad and Android. It was also a part of the Metal Slug Anthology collection.

Metal Slug 3's gameplay mechanics are essentially the same as previous Metal Slug games; however, the game contains many new gameplay features such as the branching path system. In many missions, the player can choose to take alternate paths to complete the level, although all paths lead to the same boss battle.

Metal Slug 3 also contains many vehicles that have not appeared in previous previous Metal Slug games, although there are no new weapons. These vehicles, in order of appearance, are:

The first mission puts you on an island, where crabs reign supreme. Shoot through them, as well as soldiers and giant bugs to get to the boss: a giant crab.

You arrive in a dark forest. What's there? Zombies, of course. Getting hit with the zombies' projectile bile turns you into a zombie, leaving you invincible against normal bullets, but another zombie hit means death. The boss of this place is a group of floating aliens and their glowy ship thing, once they're taken out.

Immediately after arriving in this desert, you are given a camel to ride. Appreciate him. Fight through waves of soldiers, helicopters and metal slugs for a while, then man-eating plants or mummies- depending on the path you choose. The boss here is... Well, I'm not sure. A floating alien-robot head? He has a beam that will turn you into gold, so try to avoid that.

The first part of this mission is played as a horizontal shooter in the style of Gradius, which culminates in a boss fight against Allen O'Neil. After defeating an alien impersonating General Morden in a fight reminiscent of the original Metal Slug's final boss fight, your character is captured and beamed aboard a ship. You assume control of another character for a vertical shooter sequence chasing them. Inside the alien ship, you will rescue the real Morden, who is found in a torture device, stripped to his underwear. After teaming up with O'Neil against alien clones of your previous character, you save your partner, destroy the ship and escape out the airlock, fighting the final boss while falling back to earth.

On the console versions, there are two more modes unlocked after beating the game. 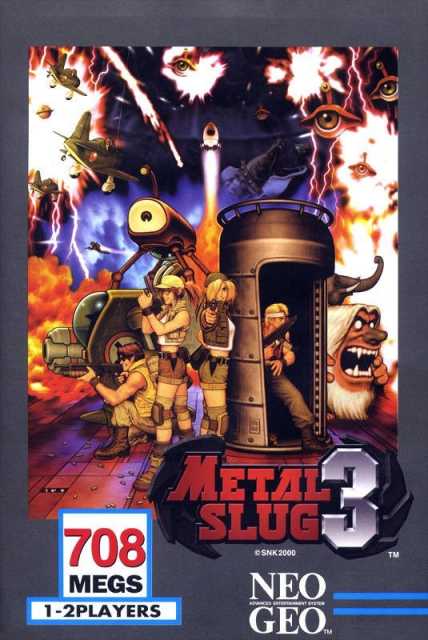