The third main installment of the fast-paced arena-based first-person shooter brings its futuristic world to the Unreal Engine 3 game engine while adding a grimy aesthetic and a new story-based single-player campaign (involving a crew of mercenaries set out to avenge their fallen colony against the Necris).
Xbox 360 PlayStation 3

Unreal Tournament 3 is a multiplayer-focused sci-fi fantasy first-person shooter developed by Epic and published by Midway for the PC on November 19, 2007. It was later released for the PlayStation 3 on December 12, 2007 and for the Xbox 360 on July 7, 2008.

The sequel to Unreal Tournament 2004 (and the first in the series without involvement from Digital Extremes), Unreal Tournament 3 brings the fast-paced arena-based gameplay to Epic's Unreal Engine 3 game engine. Along with a revamp of both aesthetics (featuring a grimier style similar to Epic's earlier game Gears of War) and gameplay (including the removal of the ability-based "Adrenaline" system), the game features customizable characters, new game modes, new vehicles, and a story-based campaign mode (which can be played in single-player or co-operative for up to four players).

Unlike previous games, the main campaign does not follow the Liandri Grand Tournament. Set in the year 2307, four years after the events of Unreal Tournament 2004, the story follows a band of survivors after their human colony was invaded by Krall forces (which was quickly discovered to be led by the Necris High Inquisitor Akasha). After joining the Izanagi Corporation as mercenaries (under the codename "Ronin"), the team (led by James "Reaper" Hawkins) works against Izanagi's rivals (Liandri and Axon) to gather resources for their payback against the Necris. It is the first game in the series to use the concepts of "Respawners" and "Field Lattice Generators" (or "FLAGS") to explain the universe's combat outside of a tournament scenario.

The PS3 version of the game features inputs for mouse and keyboard controls and support for community-made mods. While the X360 version does not feature any of that, it includes timed-exclusive content (including maps, characters, and split-screen support). The PC and PS3 versions of the game later received a major content update on March 5, 2009. Dubbed the "Titan Pack", it added a new user interface, numerous gameplay improvements, a dozen new maps, two new game modes, new vehicles, and the namesake "Titan" mutator. The PC version was also digitally released by Epic for Steam on the same day, with the Titan Pack included, as Unreal Tournament 3: Black Edition (also known as Unreal Tournament 3 Black).

The base game includes 28 playable characters, with eight characters as unlockables, two characters requiring a pre-order unlock code, and two characters with a timed exclusive for the Xbox 360 version). All characters are sorted into five factions (Iron Guard, Ronin, Krall, Necris, and Liandri) and are customizable (with players choosing armor pieces).

A team of human mercenaries backed by the Izanagi Corporation. Comprised of survivors from the invasion of the Twin Souls colony, they will not rest until they witness the destruction of all responsible for the massacre.

Led by Reaper, they are clad in red-plated armor with black mesh and serve as the game's main protagonists.

An elite group of assassins backed by the secretive Phayder Corporation. Comprised of humans brought back from the dead (using the company's Necris Process, which uses "nanoblack" nanobots to reanimate corpses), they declare war on Earth's forces and begin conquering worlds.

Led by Akasha, they wear black armor with golden plating and serve as the game's main antagonists. Unlike previous Unreal Tournament games, they are also seen with cybernetic body parts.

Consisting of highly trained human mercenaries, the Iron Guard is also known for their continued presence in the Liandri Grand Tournament. Currently, they guard areas belonging to the Axon Research Corporation.

Led by Lauren, they wear thick yellow armor and serve as one of the game's minor antagonists.

A team of combat-modified security drones for the Liandri Mining Corporation, also known for their continued presence in the Liandri Grand Tournament. Currently, they guard areas belonging to Liandri.

Led by Matrix, they serve as one of the game's minor antagonists.

A tribe of intelligent, yet vicious, reptilian predators used by the Necris to pacify newly-conquered planets.

They are led by Scythe, and is their first appearance in the series since the original Unreal. They serve as one of the game's minor antagonists. 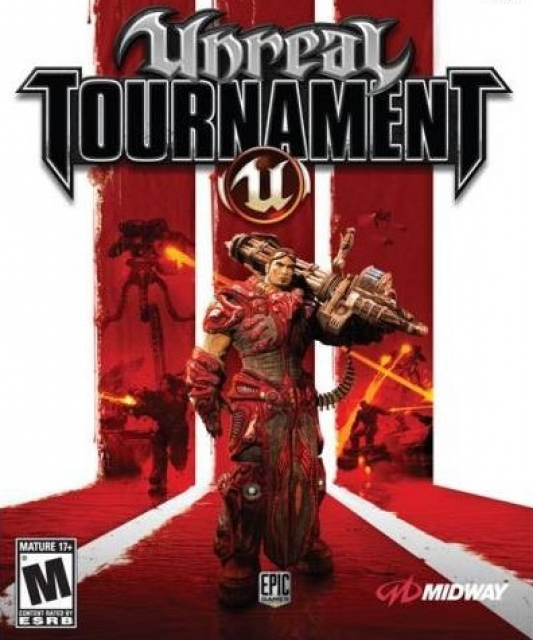