Kao the Kangaroo Round 2

Sequel to KAO the Kangaroo on the Dreamcast, Kao the Kangaroo Round 2 features familiar 3D platforming, charming visuals and soundtrack
PlayStation Portable PlayStation 2

As the story goes, the evil hunter Barnaba, whom Kao defeated in the previous game, has returned once again with his henchmen to imprison the planet's animals and suck the Earth dry of its resources. Kao is one of the first critters rounded up by the pirates in Barnaba's service, but, thanks to some timely help from a clumsy parrot, he's also the first one set free. After stepping off the boat, Kao finds himself in the dark docks, which act as a hub for the six worlds that he must visit. Each world follows the typical adventure game layout, consisting of three or four large levels followed by a boss battle at the end.

The game features typical 3D platforming formula. The main goal in each level is to reach the end, which consists of jumping between platforms, triggering switches and using weapons and vehicles to do so. Furthermore, each of his moves can be upgraded by collecting the stars that are scattered generously throughout each level. Interactive objects, like springboards and overhead rope bridges, also give you something else to do besides running and jumping. 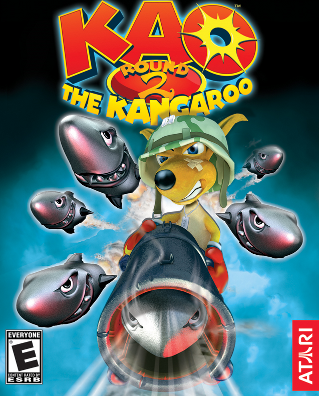