Independently developed by S2 Games, Savage 2: A Tortured Soul is an online, team-based game. It uniquely combines elements from the first-person shooter, role-playing, and real-time strategy genres. It is the sequel to Savage: The Battle for Newerth and was officially released on January 16, 2008.

Savage 2: A Tortured Soul is a FPS/RPG/RTS that pits players against each other in an RTS-like battle for map control, with victory being awarded to the team who manages to destroy the base of their opponents. It is similar to the Battlefield franchise in that players from each team attempt to control the map, whilst one player on each side plays as the 'Commander' directing and supporting their team throughout the battle - where the two franchises differ, is the Commander takes on a much more active role in Savage 2. The Commander plays out a match much like an RTS, building a base (to give the action players access to more powerful weapons, technology and spells), directing the combat and assisting his team through the use of various spells.

Savage 2 is set in the fantasy world of 'Newerth' with the two opposing sides being the 'Beast Hord' and the 'Legion of Man' - these are the two teams that battle it out during any given match of Savage 2. The two teams each have access to a variety of different units, buildings, spells and abilities to aid them in the battle. The 'action players' are those players that fight on the ground, and are involved actively in combat throughout the match.

Most units in the game have a melee attack (swords, daggers, claws etc.) and a ranged attack (guns, bows, magic etc) but the game has a heavy focus on melee combat, which takes the form of a rock-paper-scissors balancing system. Players can block, quick attack, and interrupt their opponents, and these will have varying degrees of success based upon what the opponent is doing at the time. This unique melee system is one of the many causes of Savage 2's steep learning curve, which can make it very difficult for new players to feel comfortable in the heat of battle.

Savage 2 is now free to play with the option of upgrading to a premium account which offers more equipment slots during play as well as various in game stat tracking.

Games in Savage 2 work much in the same way as they would in a traditional FPS game, with players being able to leave/join any game, at any time. When a game is set to start - players nominate to join either the Human or Beast team and are then required to vote on a commander for their team. Players can nominate themselves to command for a game, and the rest of the team chooses their preferred commander from those nominated - the player with the highest votes becomes the commander for the duration of the game, or until they resign. Once a commander for each side is chosen, the commander selects 'Officers' who gain a buff as well as the ability to place 'Spawn Portals' in the game - these spawn portals serve much like Garrisons/Sub Lairs but only players from that 'Squad' may spawn there.

Once a Commander and Officers are chosen, players join squads and the game begins. A game usually starts with players seeking out the closest mines to their base, clearing the expansion point of NPC enemies and the Commander building a Garrison/Sub Lair and subsequently a gold/grove mine. Players then generally must make the choice between harassing the enemy expansions/base or moving to clear further gold mines - these types of tactical decisions are usually made by the Commander who will help to direct the flow of battle.

Much like in any RTS game, each side in a match needs to collect gold in order to build buildings to advance their technology, skills and magic as well as to defend their base. In each map in Savage 2, a number of gold mines are placed around the map at strategic locations; these gold deposits can then have a mine built on top of them in order to extract the gold for the controlling team. Gold mines are constantly a focal point for combat in the game as teams attempt to gain a map control, or resource advantage over the other team. Because of the heavily contested nature of a gold mine, a Garrison (for the Human side) or Sub Lair (for the Beast) must be built before a mine can be built, this building will provide a forward spawn point for the team, allowing them to quickly defend the mine it comes under attack.

As well as a Garrison or Sub Lair, Commanders often build de fensive towers at gold mines in order to further protect their investment. Towers deal a lot of damage to a normal player unit, and are difficult to take out without the use of siege weapons - because of this, towers are extremely effective early game, before the teams have access to the higher technology tiers that enable the use of siege weapons.

A new addition to the Savage franchise in Savage 2 is that of the Hell Bourne units. These units are a kind of 'super unit' that are extremely powerful, and have extra requirements to be able to use them. The Hell Bourne units currently in the game are:

Maliken is a unique Hell Bourne unit in that he is not summoned at a Hell Shrine like the other Hell Bourne units. To spawn as a Maliken, the team does not have to have control of a Hell Shrine at all, and a player can turn into Maliken at any place on the map, provided that no one else on his team is already playing as Maliken. In order to spawn as Maliken the player needs to have purchased the brain, heart, lungs and soul of Maliken, and must have 10 souls. When the player has met these requirements, they simply activate the soul in their inventory, and they will become Maliken wherever they are on the map.

Savage 2 has a unique melee combat system that is designed to take out a lot of 'button mashing' that occurs in a lot of hack n' slash style games. The Savage 2 melee system revolves around three separate attacks that have varying degrees of use depending on when they are used.

As well as these three standard attacks that are available to all units in the game except for the siege units, individual units have special abilities that can be used to aid them in combat. The Savage for example has an ability to inflict bleeding on an opponent causing damage over time, the Marksman has a backstab ability that will cause massive damage should the opponent be facing the other way when the ability is used.

Savage 2 has a number of buildings available to each side to help them gain access to more powerful technology, magic and skills as well as to defend their base.

In Savage 2 there are a variety of items that can be purchased using the gold collected by an action player throughout any given match. These items are not persistent and must be used within the same game that they are purchased. Items have varying uses such as replenishing health, increasing movement speed or armour, offering a free teleport to base and more. 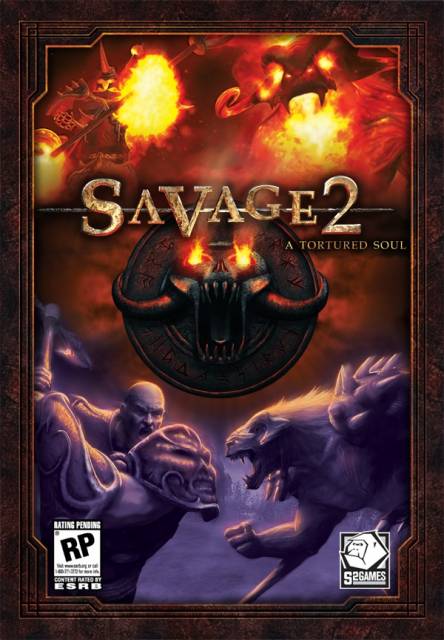