Space reporter Ulala is back on the scene with a thrilling sequel to Space Channel 5 that improves on the original in every conceivable way. Sega delivers improved music, expanded game mechanics and oodles of the 60s sci-fi style that made Space Channel 5 a cult classic, despite the low sales.

Space Channel 5: Part 2 was originally released on Dreamcast in Japan, but was not brought to the United States. Fortunately for fans, Agetec released a double pack of the Dreamcast games for Playstation 2. The emulation was perfect, which was surprising given the budget price of $20 for the game. In 2011, the game was released as a digital download on Steam and Xbox Live Marketplace as a part of the Dreamcast Collection.

The galaxy is threatened yet again by evildoers with wicked dance moves! This time, the robotic Rhythm Rogues have kidnapped over 300,000 people throughout the galaxy! The villainous Purge kidnaps Space President Peace and demands a ransom of 6.6 trillion space dollars which must be delivered to point Double X! Intrepid reporter Ulala is back on the scene, and will get to the bottom of the story with her funky dance moves.

To get the scoop, Ulala must reunite with the characters of the first Space Channel 5, including Jaguar, Pudding and Space Michael! New allies like Pine, a member of the Sexy Space Police are there to help her. With a whole new cast of bosses to dance battle, Ulala will need every bit of help.

Space Channel 5 is a variant of the 80s electronic game "Simon Says," where players must match the commands in rhythm to the music.  For example, a captured character might request the sequence, "Up, down, up, down, chu, chu, chu!" Players would have to press "Up, down, up, down, X, X, X" in rhythm to the music. To succeed, a sense of rhythm and a good memory are key. Often, on screen cues remind the player of the sequence. For instance, two chu commands would be visually indicated with two robots. If the sequence is correctly entered, the player is rewarded with seeing the robots blasted.

This sequel introduces several new gameplay mechanics that make the experience more complex. A "Recuse" beam is added to Ulala's arsenal, which is activated with the circle button. The beam is used to rescue hostages. If the button is not pressed at the correct time, the hostage is not rescued and they are not added to the list of biographies on the title screen.

The second gameplay mechanic that has been added is the hold function. For instance, Ulala might get the command sequence "Chu! Chu! Chuuuuuuuuuuuuuuu! Chu!" Ulala would have to hold the X button on the third input for the correct amount of time.

Secrets have been added to the gameplay, which boost Ulala's ratings. The key is to hit X at the correct time in the cutscenes. For example, on the first stage if you press X for the second and third notes of the "Mexican Flyer" opening theme song, Morolians pop out of the edges of the screen and Ulala gets a boost to her ratings. Finding secrets is not critical for success, but does give the player more room to make mistakes in boss battles.

Rather than having a set number of hearts, or allowable mistakes during boss battles - the number is calculated based on her ratings. This is a major change from the original game, and makes the gameplay before the boss sequences more important. Do well and you will have plenty of extra chances should you make a mistake. Do poorly and expect to repeat the level.

Also, in the original, enemies popped in after the end of every sequence, requiring Ulala to blast them with an single Chu command. This is largely the same, but instead of blasting them Ulala strikes a funky dance pose.

Ulala
The heroine of Space Channel 5, who the player almost always controls. This 22-year-old reporter is voiced by Apollo Smile, and carried both a microphone and two blasters in a garter holster. In the original game, she discovered that Blank, the CEO of Space Channel 5 was controlling the Morolians and forcing them to invade the galaxy for ratings. Players can look forward to unlocking new outfits for her on every stage. Successfully rescuing hostages rewards the players with "costumes" which simply swap Ulala's model for other characters.


Pudding
Pudding is Ulala's rival, and a returning character from the first Space Channel 5. She's taller and thinner than Ulala, and according to her biography had two nose jobs while she was a teenager. She plays a guitar in the new music sequences of the game.

Moroliians
In the first Space Channel 5, the Moroliians invaded the galaxy. In this episode, they've been freed of their brainwashing and often fight alongside Ulala. They also deliver reports in the game's cutscenes.

Jaguar
Jaguar is the primary love intrest in Space Channel 5. A blond, dashing pirate reporter,  he saved Ulala after the destruction of Blank and Giant Evila. Initially in the sequel, Jaguar has gone missing.

Shadow
Shadow is a henchman of the villainous Purge, and is dressed entirely in black. In the first three stages of the game, he is frequently there, kidnapping people and executing his boss's evil orders.

Pine
Pine is a new major character for this sequel and a member of the Sexy Space Police. She warns people, "When there's slime, involved in a crime - we'll clean him up on the beat!" She is from Texas and wears a cowboy hat. Most of stage three is spent combatting her, as she wants to stop Ulala from reporting and "disrupting the investigation."  Ulala encounters Pine on Stage 3, but joins forces with her to stop Purge later in the game.  She plays drums in the music sequences, as do her two deputies.


Purge
Purge is the main villain of Space Channel 5 part 2. He's responsible for kidnapping Space President Peace and for stealing the transmitter for Space Channel 5. He could be said to have an effeminate voice and manner, and has a white loop of hair wildly reaching for the sky.  Purge has control of Shadow, and frequently appears on television screens to command him. In the final boss battle, we learn that his true reason for kidnapping hundreds of thousands of people is to force the galaxy to watch his television show.


Space President Peace
Ulala's main mission in this sequel is to rescue the Space President, who has been kidnapped by Purge. Ulala must be careful not to hit him while saving him. For example, in stage 4 Shadow seals the president inside a giant dancing robot. Ulala must enter in the opposite of the sequence given in order to rescue him. For instance, Purge says "Left, right, chu" Ulala must enter "Right, Left, Chu." Space President Peace also sings the song for the closing credits of the game. He wears glasses with star shaped frames.

Like the previous game in the series, the soundtrack to Space Channel 5: Part 2 was primarily composed by Naofumi Hayata, but was joined by a series of collaborators including Mariko Nanba, Tomoya Ohtani and Kenichi Tokoi. The soundtrack was released in two separate compilations, both released in April 2002.

It took such a long time for this sequel to reach the United States, the graphics were quite dated. Still, reviews were favorable. IGN gave Space Channel 5 a 7.4 and praised its budget price of $20. Reviewer Douglass Perry noted, "It's a steal. If you have any mind for music games, you need Space Channel 5. "

Gamespot was more mixed in its analysis, giving the game a 6.9. Reviewer Brad Shoemaker mused, "It's a little rough around the edges, but Ulala is still swinging." He went on to praise the style of the game. "Every so often you run into a game that's a little short on gameplay, but so long on quirky appeal that you can't help loving it."
Michael Jackson's Moonwake
Ulala's Channel J 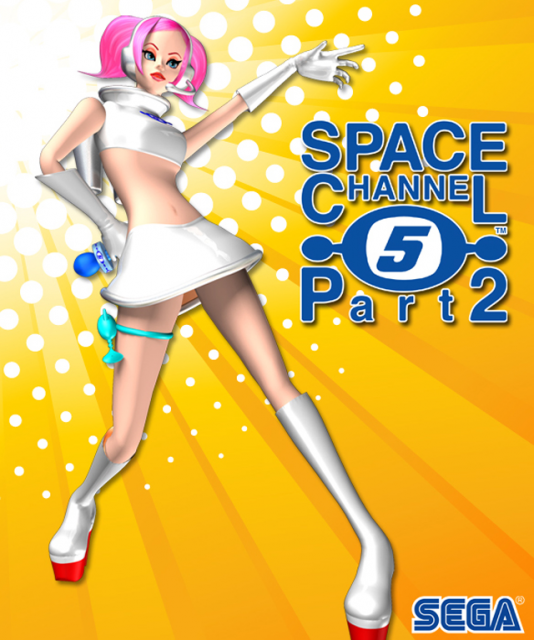