A platformer based around exploring various themed worlds in order to find remotes with which to fight Gex's nemesis, Rez.

Gex: Enter the Gecko follows the adventures of the bipedal lizard Gex, an old (at this point retired) action game hero who has lost his passion for adventure and has slumped into a state of intense apathy, now spending every waking second watching TV, ordering Chinese food, eating Chinese food, or watching TV while eating Chinese food. After what could be years in this state, Gex's routine is interrupted by Rez, an old arch-nemesis who wants only to annoy Gex and destroy the world by combining the forces of various TV villains and running rampage on the real world. Gex, co-opted by the government and a crowbar is then tasked to go and save the world again.

Gex's struggle takes him from old rerun series to old rerun series as he collects TV remotes to try and turn off the plans of Rez. To aid him in his quest Gex can wear special suits to feel more at home in the show he's in and break old TVs to gain powerup bugs that reside inside such as fire and ice breath, 1ups, health pickups, and others.

Gameplay revolved around collecting remotes by completing objectives or reaching the end of a level. These were red remotes that were collected as Gex completed either specific objectives that, when selected from the TV in the hub world Gex would receive a clue for, though any objective could be completed regardless of what hint was chosen. These remotes served a similar function to Mario 64's Power Stars or Banjo-Kazooie's Jiggies.

There are also white or silver remotes that are unlocked either by collecting 3 different tiers of items which varied from level to level, but always had some joke attached to them or amusing significance, or by finding the hidden white remote in a level. These remotes unlocked the special stage areas where the player can unlock yellow remotes that when every remote was collected, the "true" ending of the game was shown when the player defeats REX in the final boss.

The game largely revolved around its 3D platforming. Gex has a variety of moves at his disposal to defeat enemies. Between the spin attack where he would spin his tail around in a sweeping motion, the coil jump which had the added bonus of launching Gex further up (though slowing his forward momentum) and the kung-fu kick which launched Gex forward straight into his enemy but inflicting slightly more damage than a spin kick, Gex was sorted.

Camera control and player movement can be controlled with both left and right analog sticks as well as the D-pad and shoulder buttons. Entering a first person mode is done when both shoulders are held. The game also has a Metroid-style password system so that those who could not (or did not) use a memory card could carry over their remote completion over to their next play session. This, however, did not save the number of extra lives.

Gex features a large selection of levels that were all accessed via a large hub-world. The levels are inspired by different movie genres. Examples:

The game was reviewed rather poorly, being compared to Mario 64 and criticized sharply for poor audio, repetition and poor dialogue. Jeff Gerstmann reviewed it at a 6/10 mentioning that its redeeming qualities stemmed mostly from stealing concepts from Mario 64 and ended with:

"I'm hesitant to call it a good game, but one thing's for sure - it's better than Croc." 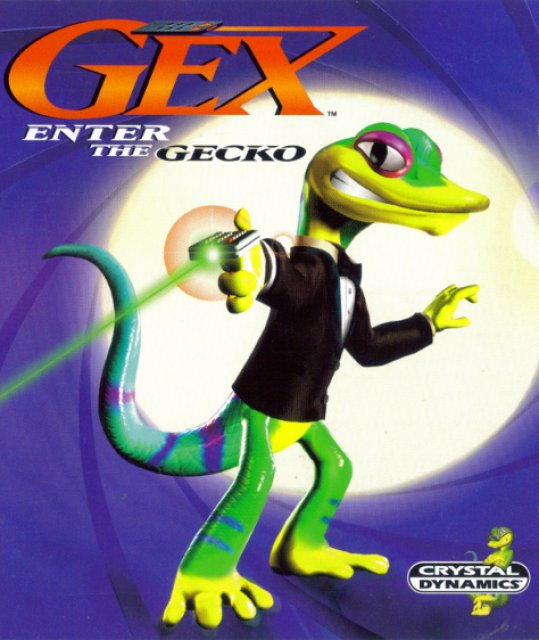