Hagane is a side-scrolling beat 'em up with a ninja/cyberpunk theme and setting.

Hagane ("Steel" in Japanese) was created by CAProduction and published by Hudson Soft. The game is a sidescrolling platformer, using ninja weapons to attack all foes and even acrobatic skills to reach areas of the game. Because of this, the game feel familiar to the original Ninja Gaiden or Strider games. The character designs are the work of Keita Amemiya who also worked on the Japan-only Rudra no Hihou as well as the Onimusha series.

There were two clans who learned ninjutsu and black magic known as the Fuma and Koma clans. It was the job of the Fuma clan to protect a Holy Grail, whereas the Koma Clan wanted to use this Grail for ultimate power and conquer the world. They attacked the Fuma Clan and stole the Holy Grail from their hands. All members were killed except for one person, Hagane. He was then revived by Momochi by transforming him into an advanced android where his body was all robotics and his mind was still human. He then pursued forward into destroying the Koma clan and claiming back the power before it is used to conquer the world.

The games play similar to the old Ninja Gaiden games where the player can move left and right, can jump on platforms and kill enemies with his sword as well has a vast range of weapons in his disposal.

A good all round weapon. Used for close ranged enemies and deals a good amount of damage. It doesn't require to refill when using the sword and the sword comes out very quickly upon pressing the button.

While it deals slightly less damage than the sword, it's good for picking enemies off from a distance. They fire at a straight line and have a limited stock. The player can collect extra in packs of 10.

These bombs are used in a short range but can deliver extra splash damage to surrounding enemies as well. These too have a limited stock and can collect extra bombs in packs of 10.

While the hook can also damage enemies, its main primary use would be for latching onto ceilings or any high ground above the player. Very useful for the difficult stages.

Few things that Hagane has to offer is his agility in movement and also in combat. He can pull off many types of jumps and his attacks in combination with his movement can produce different abilities.

The levels themselves do have a strict learning curve due to the perfect timings on platforms as well as distinct boss patterns that they have. 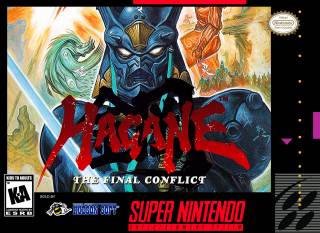