A vertically scrolling shoot 'em up, from Treasure that features unique polarity-switching gameplay. It is the spiritual successor to Radiant Silvergun.

Ikaruga is a shoot 'em up from Treasure in which the player must evade a bullet hell storm of fire by switching their polarity from black to white to black again. Bullets of the same polarity will be harmless to the player. The story involves the player taking on an Empire of "Divine Ones", who became all-powerful after discovering a divine weapon. The player character is shot down near a village of exiles from the Empire, is restored to health and is given a special fighter plane that is able to switch polarities which is named for the place of its construction: Ikaruga.

Ikaruga was developed for the Arcade by Treasure in 2001. It was later ported to the Sega Dreamcast the subsequent year, following its spiritual predecessor Radiant Silvergun to a Sega console. When it was released on the GameCube the year after that in 2003 it also saw localized versions in the US and Europe for the first time. The game would see another global release for the Xbox 360 Games Store in 2008 courtesy of Microsoft Game Studios.

The gameplay in Ikaruga revolves around black and white energy. The player ship can change between the two colors, and fires shots that match its current polarity. All of the enemies are either black or white, and hitting enemies with their opposite color does additional damage. The player ship can absorb same-colored enemy fire, and absorbing shots charges a secondary attack. There are three difficulty levels.

On "Normal", enemies that match the player's ship's color release a burst of same-colored shots when destroyed. On "Hard" all destroyed enemies release a burst of shots in their color, and on "Easy" none of the enemies release any shots when destroyed. Despite their names, "Easy" and "Normal" modes can actually make the game more difficult in certain situations, because they reduce the number of dots that a player can absorb to charge their screen-clearing special attack.

Like many bullet-hell shooters, the hitbox for the player's ship in Ikaruga does not encompass the player's entire ship and only exists at the ship's exact center. If an enemy projectile or ship makes contact with the center of player's ship, they lose a life. On each playthrough a player has three lives. Once these lives are depleted they must use a Continue if they wish to keep playing.

An extra part of the game which gives it more depth is the chain combo system. A chain combo occurs when a player destroys three ships of a certain color in a row. For example, if players defeat three black ships, then another three black ships, and then three white ones, that is three chains. Each level has a perfect playthrough pattern by which the player can clear the level with an unending chain combo. The chain system provides additional depth to those who have cleared all the levels, and encourages repeat playthroughs and memorization of the enemies' patterns.

The plot of Ikaruga revolves around a group called "The Divine Ones" lead by Tenro Horai. Horai discovered an item called the power of the Gods, and with it he led his island nation on a path of conquest, taking over several nations, but a group of freedom fighters called the Tenkaku arose to oppose them. They fought back against the Horai but were defeated, except for one man called Shinra, who landed near the town of Ikaruga. There he recovered and was nursed back to health, vowing to defeat the Horai. The villagers trusted him enough to give him a unique fighter plane developed by their village, the Ikaruga, it is capable of using both types of energies and switching between them, that is when Shinra begins to fight back. When the game is played co-operatively, the second player assumes the role of Kagari, one of Horai's mercenaries who was defeated by Shinra. Due to Shinra sparing her life, she decided to join the resistance, and the villagers equipped her ship, the Ginkei, with the same polarity swapping powers of the Ikaruga.

Ikaruga was developed for Sega's NAOMI arcade hardware by a core group of three people within Treasure Co. Ltd. Hiroshi Iuchi, famed for his work on the shooter classic Radiant Silvergun acted as the game's lead designer, and also worked on the game's backgrounds and music.While not officially a sequel, Ikaruga contains similar gameplay to Radiant Silvergun and a distillation of that game's combo-based scoring system . The game received a disk release on the Dreamcast and GameCube, and is available for Xbox Live Marketplace.

Although it did not sell many units in its initial Japanese release (around 18,500 units in its first week on Dreamcast and around 6,000 units in its first week on GameCube), it is highly regarded by shoot 'em up fans, as can be seen on this active unofficial leaderboard. Its début on Xbox Live Arcade also boosted its sales significantly and added official leaderboards and replay options that allow players to compete for high scores and compare techniques.

After the game's initial release, Treasure released a DVD titled Ikaruga Appreciate which featured playthroughs of the game by some of the world's best players. The DVD includes runs at each difficulty level and acts as a helpful tool for those wishing to understand the game's patterns.

In 2011, Ikaruga featured as the final round game in the Omegathon tournament at PAX East.

When the game was released the Xbox Live download service, there was some discussion about differences between the downloadable version and the original game. These discrepancies were brought to light by Kingoro58k, an Xbox player and Ikaruga expert. After setting some of the highest scores within the Xbox version of the game, Kingoro58k characterized the port as "Ikaruga LOL" and said that it was "not Ikaruga". In truth, the differences between the Xbox version and the arcade original amount to a few enemy placement changes and a miniboss in chapter 3 whose patterns are mirrored. 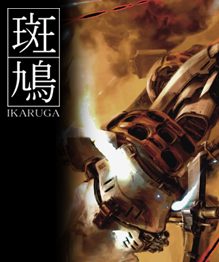