Getsu Fuuma Den (月風魔伝) is an action-adventure-platformer-RPG developed for the Famicom (NES) by Konami, with distinctive hologram box-art.

Getsu Fuuma Den has heavy "adventure" elements; the player moves Fuuma around on a world map to enter the various hellish places he must pass through on his journey to reclaim his family's lost heirloom and to defeat the overlord of the demons, Ryuukotsuki. In addition, there are various other locations to stop at on the world map, from shops to locations where spooky demons will give Fuuma hints as to what to do.

The side-scrolling portions of the game are simple to control: Fuuma can move left or right, jump, and attack. Enemies that collide with Fuuma will deplete his life in a typical fashion. Some stages feature objects that will block Fuuma's path (I.E., an iwakura). These can generally be destroyed by striking them with an attack. The beginning and end of most of the side-scrolling stages are indicated by tori style gates.

Other portions of the game are from a sort of third-person view: In these parts, Fuuma must navigate maze-like corridors to reach one of any number of objectives (either an item or a way out, generally!) Fuuma can strike with his sword in these portions as well as jump, but obviously the perspective is different and play style must be adjusted accordingly!

Many items can be picked up Fuuma's quest to aid him on his journey. These are items that are used in battle.

These items have a supporting role for Fuuma.

In the year 14672 of the "Magic Calendar", the demon king Ryuukotsuki (龍骨鬼/"Dragon Bones Demon") emerges from the underworld and brings Hell to Earth! Humans face extinction and demons roam the world with impunity. The three Getsu brothers, the "Getsushisan Kyodai" who had ruled Earth before the coming of the demons, stand virtually alone against the hordes of the underworld. With his two elder brothers slain in battle, it falls to Getsu Fuuma alone to destroy the demon armies and avenge his fallen brothers by destroying Ryuukotsuki himself! But before he can do that, he must reclaim his family's heirloom, the "hadouken" (波動剣/ wave sword).

Getsu Fuuma: The protagonist, he is a heroic swordsman who is virtually a demigod in nature. He has a running speed of over 60 km/h ( a little under 40 miles an hour) and can easily lift over 180 kg (around 400 pounds).

Ryuukotsuki: The demon lord. He killed Fuuma's brothers and stole the Hadouken from them, the only sword deadly enough to harm him. He has fragmented the hadouken and hidden the parts in various locations under the protection of his top minions. 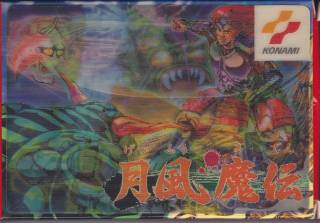