The sequel to the Geomod charged first-person shooter Red Faction, Red Faction II focuses on a military-driven storyline instead of the uprise of a lowly miner.
PlayStation 2

Red Faction II is the sequel to THQ's First Person Shooter Red Faction. This time, the game scraps the old storyline in favor for a newer more military driven story. It is the year 2163, 5 years after the events of Red faction.

The EDF has broken Ultor up and reorganized them, and now uses technology that was produced by Capek. This ' nanotechnology' has sparked major success with the development of military weapons and technology, including the making of super soldiers with bio genetical enhancements. Terrorists and resistance groups have been stealing this tech however for years from the old Capek labs. As a result. there are many organizations like "The Common wealth" who are out to steal technology or data. The player actually plays as a special ops member of the commonwealth. The leader of the commonwealth, Sopot, acquires this new tech and later uses it to power his massive military into all super breed soldiers. Soon he begins to fear his work, and orders that they are killed and replaced with slower mutant style soldiers known as "The Processed". However a few of these commonwealth super soldiers flee and survive the death squads that come after them. There are 6 of them, including Alias, the player. Alias and one other member, Tangier, escape the commonwealth. Sopot's orders to destroy his remaining commandos results in the remaining troops joining up with the Red faction Resistance in a stage effort to kill Sopot and destroy the commonwealth and save the people.

The Player will now work with the Red Faction throughout the game to attack Commonwealth troopers, destroy enemy technology and burn all visible commonwealth propaganda. The game see's the last of these troops fighting their way to an ICBM nuclear launch silo. Here, Sopot planned on nuking Red Faction native lands to eliminate them from existence or damage them beyond any repair. A twist and change in events occurs at this point back at the Red faction HQ. Alias returns to the Red faction base only to walk in and discover all the red faction senior members had been murdered. Molov, the new leader that rises to power, after Sopot's death, declares Alias and Tangier heretics of the commonwealth and are labeled enemies of the state. At this point the Red Faction explain they didn't mean to cause a conflict in the streets of the commonwealth utopia. Molov speaks directly to the Red Faction leader on earth, Echo. He tries to explain himself, and how the Faction just wants peace and fairness in the system, but Molov declares war. At this point, the player goes solo and meets up with Echo. You and Tangier will work cooperatively (but on different fronts) to bring about the defeat of Molov and the other 3 super soldier commanders. The game ends on the massive Sopot statue with the end result of one of four endings.

The PlayStation 2 version of Red Faction II features a deep split screen multiplayer mode with bots on over 50 maps. The Geo mod technology is also used here in Red Faction II, though not to the same extent as the original game. The PC version is limited to botmatches only, as the game inexplicably does not have an online mode, nor support for local split screen play. 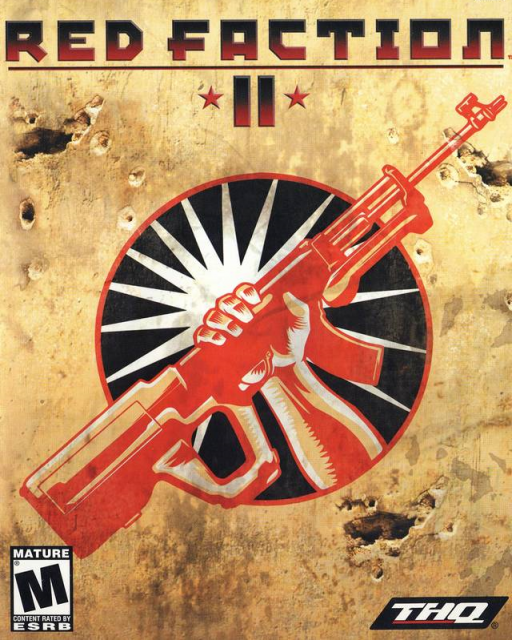