A side scrolling shooter in space, for the Genesis, which features a spaceship that can transform into a mecha.

Arrow Flash is a horizontal scrolling shoot 'em up developed (through a contractor, ITL) and published by Sega for their Genesis home console.

The ship in this side-scrolling shooter can transform between robot and jet mode. The player can acquire speed power-ups, as well as a positionable option-style craft which fires in unison. Energy slowly builds while playing which can be used in the titular "arrow flash" maneuver in robot mode, which is a damaging form of invincibility. If the arrow flash is used in spacecraft mode, it fires a wave of wide blasts that hits multiple enemies.

The basic attack types are a self-guided wave shot, a blue beam wave, and a coil that fires straight ahead. The option satellite ships can also gain the ability to fire guided missiles. All the weapons and speed acquired are lost if the ship is hit, and it can only take a single hit before it's destroyed.

In the middle of stages, there's an "out of danger" alert, allowing for a short respite while the scenery changes. While the backgrounds aren't very detailed, they are multi-layered and dynamic. 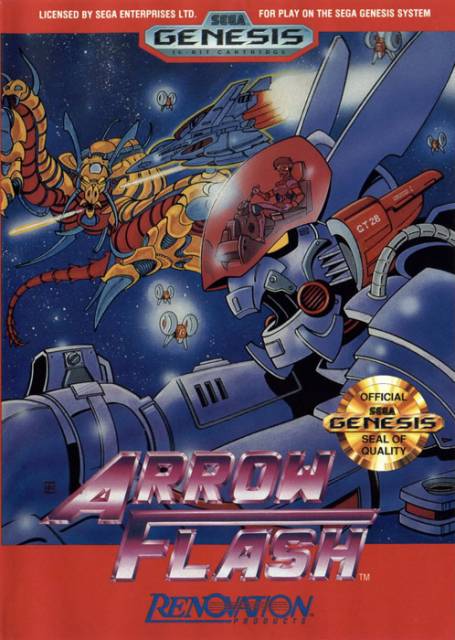