The Lord of the Rings Online: Shadows of Angmar

A free-to-play MMORPG set in the Lord of the Rings universe, at the same time as The Fellowship of the Ring.

The Lord of the Rings Online: Shadows of Angmar is an MMORPG developed by Turbine and released in April 2007. It was originally a subscription-based game, but on September 10th, 2010, it transitioned to a free-to-play model, similar to Turbine's Dungeons & Dragons Online. The players start at the same time Frodo and his company start their journey from The Shire, and as the player progress through their own storyline, they'll be reminded of the Fellowship's whereabouts and will sometimes meet them.

There are currently four playable races:

There are seven playable classes, each with its own special skills and abilities.

Burglar's, commonly referred to as burgs, are the stealth/sneak class. They focus on sneaking up to the enemy and laying down the critical strikes. One of their main roles in a fight is to steal the enemies ability to deal damage and to deploy Fellowship Manoeuvres to benefit the group. They mainly use evading as a means of defense. Burgs are available to the Hobbit and Man races.

The Captain's primary role is to buff the group. They have heralds (pets) that help maintain buffs while in and out of combat. At later levels the captain has the ability to resurrect fallen allies, making them an incredible asset to any group. Captains are available only to the race of Man.

Champions are the main melee DPS class. They have AOE attacks that enable them to dish out damage to their foes. Champions are limited to Dwarves, Elves, and Men.

Guardians are the tank class of LoTRO. Their primary purpose is to keep the enemies' attention, allowing the group to do what's necessary in order to defeat the enemy. Dwarves, Elves, Men and Hobbits can all be Guardians.

The Hunter class is responsible for ranged-burst DPS. Hunters are arguably the most feared on a battlefield for their ability to dish out massive damage in single hits. Hunters come in 4 races: Men, Hobbits, Elves and Dwarves.

The Lore-Master class is the crowd-control class, which allows the group to take control of any fight. Lore-Masters, much like captains, also have pets that assist with many tasks. Men and Elves are the only classes able to be a Lore-Master.

The Minstrel is the primary healing class. Armed with a musical instrument, they raise morale (health) to their group. As expected with any game, the Minstrel is a very important class to have. Men, Elves, Hobbits and Dwarves are able to play as minstrels.

With the expansion pack Mines of Moria, two new classes were introduced to the ranks.

Rune-Keeper's are a hybrid healing and burst damage class. Arguably the best class and most overpowered for the abilities they have, but they are limited to whatever they are using. For instance, the Rune-Keeper cannot heal after using a bunch of attack spells, nor can it attack when using healing spells. Depending on the situation though, a good Rune-Keeper can turn the tide of a battle. Only Elves and Dwarves are able to be Rune-Keepers.

Wardens are another tanking class, though they lack the ability to tank like a Guardian. The Warden class relies on combination moves to buff themselves, allowing for versatility on the battlefield. Able to use ranged tactics as well as melee, Wardens can also prove to be a huge threat. Men, Elves, and Hobbits are the only classes allowed to be Wardens.

During the beginning there were 11 areas available for the player to visit, two of these were released for free after launch. All of the regions are located within the area of Eriador. Turbine has said that more of Middle-Earth will be available through both free updates and expansion packs. Expansion packs will follow the Fellowship's journey and bring Moria, Mirkwood, Rhovanion, Rohan, Gondor and Mordor for the player to visit and help out against the evil that lay there.

The gameplay is what you expect from a modern MMO. That involves earning experience by killing monsters and completing quests. The experience is then used to gain levels. When gaining levels you improve your characters skills and abilities with the help of a class trainer that only takes a few coins for the service.

One of the things that separates this game from others in the MMORPG genre is its way to handle instances. The main difference is that the instances are very story-driven, an example of that is the beginning of the game. After just creating your character, you'll experience your first set of instances that starts your own epic questline of which you'll continue through in the form of different books. Instances comes to the player through the story, due to the reason that other players could already have been there in the storyline. That is why you get yourself your own private instance to immerse yourself within when you progress through your own epic storyline and some other important quests.

This is Lord of the Rings Online's answer to PvP. Here you can take control over an evil monster (creep) and fight against the Free People of Middle-Earth (freep). There are 5 different playable classes in monster play for the player to choose from.

In Middle-Earth, music plays an important factor. These factors can include everything from the minstrels lovely tunes that boost morale, to the local band that plays music for the guests at The Prancing Pony in Bree. In the game you can play a lot of different instruments for the entertainment of your friends.

You're able to buy a home of your own in Middle-Earth, where you can stash your treasures and arrange parties with your neighbors.

Book 13 came with the introduction of the hobby system. Now you can find yourself a quiet lake in the Shire and start fishing. Currently, only fishing is available, but the developer's have mentioned that they want to add more, whether they will or not remains to be seen.

When Lord of the Rings Online (LOTRO) was launched in April 2007, it featured eight "books". Each book contained a series of quests, usually centered around supporting ancillary characters to the Fellowship. The quests varied in length, difficulty and objective, with a mixture of single-player, small group and large group instances. The books usually completed a self-contained story-line that added to the game's narrative, and ended with an instanced quest and full motion video vignette. Subsequent updates to the game have added additional books, for a total of 14 books in the Shadows of Angmar storyline. Turbine has announced that with The Mines of Moria expansion pack a new series of books will begin.

The initial 8 books that were released along with the game are:

The books released through DLC are: 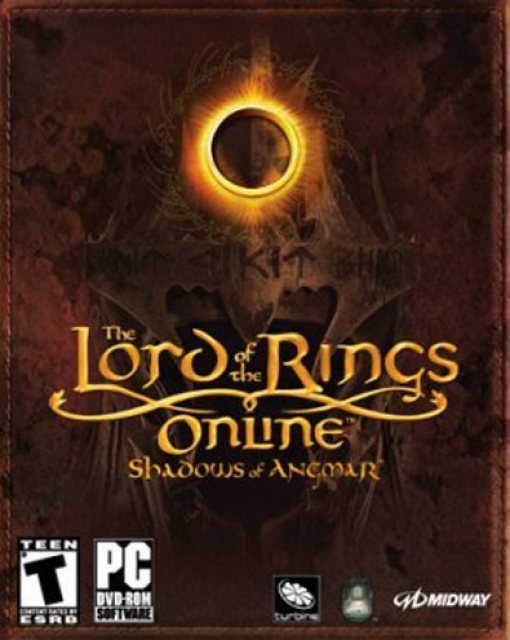