The Battle for the Kaladi System is about to go underway, three races will fight for the planet`s abudant and rare resources. An arsenal of upgradeable weapons await you in this multiplayer shooter.

A multiplayer-focused first person shooter in the same veins as Unreal Tournament, with a basically non-existence single player campaign.
In the multiplayer, a player can either fight online with xbox live (no longer supported) or play offline with bots.

The AI Bots on Offline mode at set between 1-4 difficulties:

A civilization of people who grew dependent on machines and soon became infertile and victims of devolution and physical weakness.   As a result, they have merged their bodies with machines, and so require resources to survive and maintain their immortal status.   Their conquest has brought them to other planets and to the Kaladi System.

A Clan of Honourable warriors, who descend from a blood line of nobles.   Their way of life is balanced and routine and based on tradition and honour.   The Kaladi System is a sacred Place for the Kovos and they do not wish to see it overrun by the opposing forces.

The Human Race which has found the kaladi system and now seeks it for their own.

The weapons in Warpath are few, but contain a good diversity and a simple-yet effective upgrade system.   In order to tap into this system, a currency called C.A.Ms (Combat Augmentation Module) that is dropped from your enemies corpses; pick these up to use them on your weapons.  At the start of a multiplayer match, you get to select 2 out of the 6 available weapons for your loadout.

Violator: The Ohm’s own creation that resembles a high-powered pump shotgun.   Slow rate of fire, limited magazine size, and short-range are the common aspects of a shotgun, but nothing is more satisfying than a close-range kill.

Wolverine: A Rugged high-powered machine gun, an old school favourite that comes from The Coaltion.

Vanguard: Similar to the Plasma Gun from Quake III: Arena, The Kovos have created this weapon to melt their enemies with spheres of deadly energy.

Javelin: The last weapon missing from this line-up would be (you guessed it) The Sniper Rifle.   The Kovos made this weapon to eliminate enemies over any distance using its accurate, variable zoom scope.

E.M.A.D (Emergency Medical Aid Device): By Holding down the “Fire” button, you can regenerate lost health.   This device is always in your load out and can be upgraded to make you more efficient and heal you faster.

Vehicles in warpath are not found commonly throughout every map, and there are only 3 vehicles that require mentioning.

Razorback: A two-man all terrain vehicle with a forward mounted machine gun and a 360 degrees turret mounted rocket launcher. 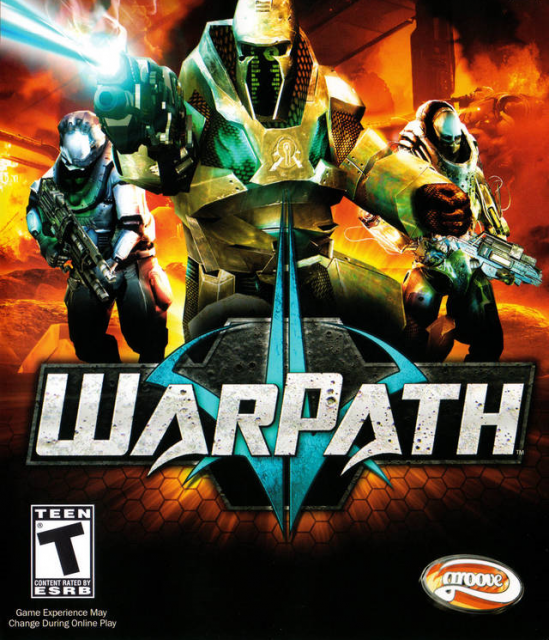